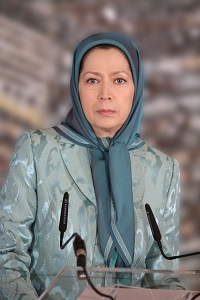 NCRI – Mrs. Maryam Rajavi, the President-elect of the Iranian Resistance, has sent a message to participants at the major rally on Monday in New York against the presence of the Iranian regime’s President Hassan Rouhani at the United Nations. The rally is urging the international community not to allow the mullahs’ regime to get away with appalling human rights abuses in Iran.

My Compatriots,
Supporters of the Resistance,
I salute you all who have risen up in protest to the presence of the illegitimate and inhumane clerical regime’s president in the United States and at the United Nations.
At this very moment, tens of millions of our compatriots inside Iran hear in your chants their own censored and suppressed voices. They praise and commend you who declare loud and clear that this regime has usurped the Iranian people’s right to popular sovereignty, none of its representatives enjoys legitimacy and they must be expelled from international institutions.
Rouhani is part of a regime whose survival is ensured only through daily executions, torture of prisoners, suppression of women and plundering of social wealth, as well as terrorism and destruction in the region.

He is competing with the other major factions over his share of the power, while at the same time moving in lockstep with Khamenei when it comes to executing Iran’s youth, the number of which has risen to 700 in the first half of this year, and when it comes to exporting terrorism.

During mullah Rouhani’s tenure, who claims to be a “moderate,” the situation of human rights has worsened by any measure. Protests by teachers and workers have been met with arrests or dismissals. Lawyers, human rights defenders, bloggers, reporters, Sunni Muslims, Christians, priests, Jews, Dervishes, Baha’is, Kurds, Baluchis and Arabs continue to be imprisoned, while the rights and freedoms of women and youth are trampled upon on a daily basis. During this period, the scope of the regime’s involvement in the region and the massacre of innocent people in Iraq, Syria, and Yemen have substantially increased. A few days ago, Rouhani shamelessly branded such meddling as support for anti-terrorism efforts and vowed to interfere in other countries as well.

So, we declare to the international community and all leaders who have gathered at the United Nations:

The solution to the Iranian and regional question lies in the hands of the Iranian people who demand the overthrow of this regime and the establishment freedom and democracy.

The disenchanted people of Iran have repeatedly risen up across the country, expanding their resistance, all want one thing, and that is to overthrow this regime.

It is no wonder that the mullahs have on the one hand increased executions, suppression and oppression inside the country, while on the other hand intensifying plots against the People’s Mojahedin Organization of Iran (PMOI/MEK) and the Iranian Resistance both inside and outside the country, especially against freedom fighters at Camp Liberty. This regime, which is standing on its last leg, considers this democratic alternative as an existential threat more than ever before.

In our neighboring country, Iraq, protests by the youth and the disenfranchised, which have once again emerged out of the ashes of suppression and betrayal, demand the expulsion of this regime and the removal of its proxies.

The people of Syria are faced with a calamity through the clerical regime’s genocide and destruction in their country. Without the regime’s ceaseless support, neither would the bloodthirsty Syrian dictatorship have remained in power today, nor would our Syrian sisters and brothers have become homeless and displaced, putting themselves in danger simply to reach the shores of Europe. The main parties responsible for the pain and suffering endured by Syrian refugees and all the Syrian people are Khamenei and Bashar Assad. The people of Syria, Iraq and Iran have common enemies and that is why they are united, and despite all the difficulties and bitter experiences.

Today, the ruling theocracy is in decline from Syria to Yemen, and the solution to ending the crises, wars and instability is to expel this regime. Similarly, confronting ISIS, against which the international coalition and others are at an impasse, would not be successful without the removal of the velayat-e faqih regime and its militias.

Allow me here to underscore this truth that depriving the mullahs from a nuclear weapon in an effective, promising and permanent manner has only one solution and that is to change this regime.

Any act of appeasement, showing weakness and giving false hopes about the ruling clerics abandoning their efforts to acquire a nuclear weapon would be detrimental and constitutes a betrayal. As such, any loophole or pathway that the deceitful regime could use to manufacture a nuclear bomb must be closed. And at the same time, freedom, human rights and the Iranian people’s resistance for regime change must be recognized; a resistance movement which until now has been the main source for exposing the regime’s ominous nuclear program and in the future will be the only guarantee for preventing a nuclear weapon.

And I warn those who pursue commercial trade and deals with the ruling regime that dealing with this regime means dealing with Khamenei and the Islamic Revolutionary Guard Corps (IRGC) and it would be strengthening their affiliated companies and banks, which have no other purpose but to provide financial support for Bashar Assad’s dictatorship, Hezbollah in Lebanon, and criminal militias in Iraq, Yemen and other countries.

Let me summarize: If the international community and especially the UN Security Council truly pursue peace and tranquility in the region and the world, they must:

First, expel the illegitimate regime’s representatives from international institutions and recognize the right of the Iranian people and the Iranian Resistance to overthrow this regime and establish human rights and democracy.

Second, withdraw the concessions in the nuclear deal with the regime and deprive it of all opportunities to build the bomb.

And, finally, compel the Iraqi government to end the inhumane siege on Liberty Prison. It is especially imperative that the United States guarantee the protection of Liberty residents on the basis of its obligations or at least return some of their personal means of self-defense to them for minimum protection against threats posed by the terrorist Quds Force and its militias.

As Massoud Rajavi, the Iranian Resistance’s Leader, said in his message: The Iranian people will not be satisfied with anything less than the overthrow of the clerical regime and the establishment of freedom and popular sovereignty. The war of liberation and the overthrow of the reactionary caliphate, free elections and drafting of the new republic’s constitution at the national consultative assembly are inalienable rights of the Iranian people.

Hail to all of you
Hail to the people of Iran
Hail to freedom.