Tom Ridge: past crimes of the Iranian regime can no longer be ignored 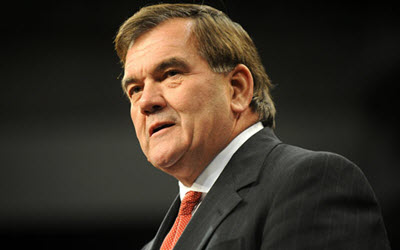 Unquestionably the US first Homeland Security Secretary is the most qualified to talk about Iran government and its officials as the ‘central bankers of terrorism’ which was the term used by Condoleezza Rice to describe Iran regime.

Tom ridge in an article which was published in thehill.com on Tuesday September 20 has specific points regarding the past crimes of Iran regime. Following is the full text:

At UN General Assembly, past crimes of the Iranian regime can no longer be ignored

It appears that Iranian President Hassan Rouhani will once again be attending the annual UN General Assembly in New York. But when he arrives this year, it will be under much different circumstances, both domestically and internationally.

His presence presents a great opportunity to challenge Rouhani and his colleagues on their human rights record and their supposedly moderate credentials. This year’s visit will take place amidst an arguably unprecedented climate of awareness about his administration’s role in previous crimes.

One incident in particular is in focus among Iranians, expatriate activists, and their foreign supporters. In early August, an audio recording was thrust into the spotlight by the son of a former top cleric, Hossein-Ali Montazeri. The late ayatollah had been the heir-apparent to the founder of the Islamic Republic in the 1980s, but was ousted from his position and from the regime itself as a result of the contents of the recording.

The 1988 tape records Montazeri chastising four other officials for their involvement in the massacre of political prisoners that took place that summer. More than 30,000 dissidents were reportedly killed.  Montazeri’s long-suppressed tirade upholds this narrative, specifically confirming some of the most shocking details of the proceedings, including the execution of teenage girls and pregnant women. Many were condemned for little more than expressions of sympathy for members of the People’s Mojahedin Organization of Iran (PMOI or MEK). The group is the largest and best-organized pro-democracy opposition movement in Iran that promotes a secular, non-nuclear republic in Iran.

One of the individuals heard on the 1988 recording is today the justice minister in the Rouhani administration, Mostafa Pourmohammadi, who was the Intelligence Ministry’s representative on the Tehran “death commission,” which held the minutes-long trials to determine which of the local political prisoners would be put to death. On the recording, Pourmohammadi eagerly defends the activities that Montazeri described as the “worst crime of the Islamic Republic.” And today he characterizes the massacre as the enactment of “God’s commandment” regarding the MEK.

Speaking to provincial officials, Pourmohammadi said that he was “proud” to have participated in the carnage. His unrepentant attitude about responsibility for a crime against humanity underscores the irony of his role as justice minister. Moreover, the fact that Pourmohammadi was Rouhani’s personal choice for the position casts profound doubt upon the assumption, by President Obama and other Western policymakers, that the Rouhani administration is a moderate alternative to the hardliners associated with Supreme Leader Ali Khamenei and former President Mahmoud Ahmadinejad. Not to mention that under Rouhani’s tenure, the regime has continued to defy Security Council resolutions banning ballistic missile tests, and has continued to support terrorism and extremist groups around the globe, which undercut the fallacy about moderation in Tehran.

The international community and U.S. Congress should have already disabused President Obama of the notion that the Rouhani administration could be reasoned with over such issues as human rights abuses and crimes against humanity. That should have been obvious during the first two years of Rouhani’s presidency. Executions skyrocketed, to the extent that nearly 1,000 people were hanged in 2015 alone. Most were condemned for political crimes like “enmity against God,” the same charge that doomed most victims of the 1988 bloodbath.

It is difficult to understand how the Obama administration failed to notice or elected to ignore recent human rights abuses. Whatever the case, the growing knowledge of Tehran’s past abuses cannot be so easily ignored, especially since the Rouhani administration’s complicity in the 1988 massacre is by no means limited to the justice minister.

Last week, the MEK, which maintains an extensive intelligence network inside Iran, revealed the names of 60 individuals who can now be connected to the massacre of political prisoners. All hold important positions, some in the Rouhani administration, some in other government entities, and some in financial institutions with close government ties. These revelations make it abundantly clear that the current Iranian government has in no fashion moved away from its past crimes against humanity – crimes for which no one has been held accountable. Indeed, those who participated willingly, even proudly like Mostafa Pourmohammadi, have been rewarded.

The complacency of the UN General Assembly and its American hosts year after year may have gone largely unnoticed in the recent past, but that will no longer be the case in the new circumstances of this year’s gathering. A dialogue has started both inside and outside of Iran in the month since the publication of the Montazeri recording. There is now unprecedented awareness about the lack of justice for the 30,000 who died. And as such, the Iranian people and the world will be watching more closely if the Obama administration and its allies once again choose to turn a blind eye to crimes for which the Rouhani government shares so much responsibility.