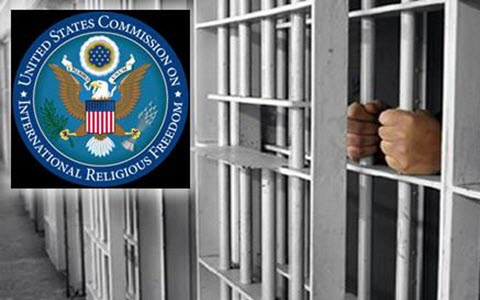 NCRI – US Commission on Religious Freedom has in its 2017 report addressed the religious freedom violations across the world, including Iran.

The commission says in its latest report released on Wednesday May 14 “there’s been a continuous violation of religious freedom in Iran over the past year, with unlawful long detention, torture, imprisonment, and execution based on religious accusations being commonplace.”

According to the 2017 report of US Commission on Religious Freedom, religious freedom of Baha’is, Christians, and Sunnis has been continuously violated in Iran, while the dervish and dissident Shiites have been subjected to intimidation, detention, and imprisonment.

The report also says that the number of prisoners of conscience in Iran’s prisons have increased following Hassan Rouhani’s coming to power in 2013.

The Iranian regime has been put in US State Department’s ‘Countries of Particular Concern’, a list including the countries guilty of severe violations of religious freedom.

Meanwhile, US State Department has also submitted a report to US Congress on imposing sanctions on Iranian regime’s human rights violators.

In the report, released on State Department’s website on Wednesday May 17, it’s been pointed to a recent sanction imposed on Iranian regime’s Tehran Prisons Organization and its former head Sohrab Soleimani, brother of notorious Gurdsman Ghasem Soleimani.

Acting Assistant Secretary for Near East Affairs ‘Stuart Jones’says in the report “as we continue to closely scrutinize Iranian regime’s commitment to the nuclear deal and develop a comprehensive Iran policy, we will also continue to take new measures to hold the regime accountable for its human rights abuses.”

Jones pointed out that the Iranian regime has for decades continued to violate the rights of its own people as well as foreign nationals, adding that the regime’s pattern of behavior must come to an end.

According to Stuart Jones, the United States and its allies will continue to put the Iranian regime under pressure to protect fundamental rights of Iranian people as well as foreign nationals, including US citizens wrongfully detained or missing.