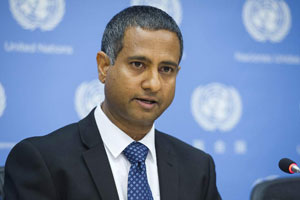 The U.N.’s special investigator on Iran says the human rights situation and repression of Iranian women and activists has worsened since Hassan Rouhani became president in 2013.

Dr. Ahmed Shaheed says “in my view the overall situation has worsened, as indicated by the surge in executions.”

Shaheed told reporters in Geneva on Monday that 753 death sentences were carried out in Iran last year, compared with 580 in 2012.

He lamented that Iran executes more people per capita than any other country and that more than half of the death sentences were for drug-related crimes.

He spoke in Geneva as U.S. Secretary of State John Kerry and the clerical regime’s Foreign Minister Mohammad Javad Zarif resumed talks on the Iranian regime’s nuclear program in the Swiss city of Lausanne to try to narrow gaps before a March 31 deadline for an outline political agreement.

“There is a lot of concern amongst the Iranian society that the nuclear file may be casting a shadow over the human rights discussion,” Shaheed told a news briefing.

Iran is one of the countries in the world that imprisons most journalists, he said.

Journalists, as well as activists, lawyers and opposition politicians are often charged with breaching a range of national security laws, including on propaganda against the system, and offending regime’s leaders, he said.

Mr. Shaheed, a Muslim and former foreign minister of the Maldives has not been allowed to visit Iran since taking up the independent post.

Mr. Shaheed has been the target many personal attacks which often include crude insults and defamatory remarks by the highest official of the Iranian regime.

Last April he wrote in an article: “The attacks against me and other UN officials pale in comparison to those often reported by Iranians who exercise their fundamental rights to free expression, belief, assembly, and association.”

“When people ask me how I feel when officials attack me or the Secretary-General, I can only respond: I am far from a victim. The real victims of these personal attacks are those that live in fear of airing their beliefs, those whose grievances continue to be ignored, and those who continue wait in silence for remedy.”

Previous articleBreakthrough uncertain in Iran nuclear talks: Washington Post
Next articleIran: 60 arrested during raid at a party in western Tehran