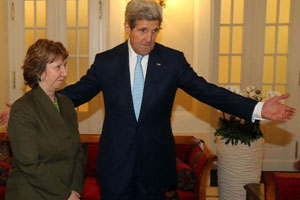 The Iranian regime and U.S. negotiators held talks on Monday in Switzerland amid mixed signals on chances of reaching a breakthrough pact that would rein in Tehran’s nuclear program in exchange for easing international sanctions, the Washington Post reported.

U.S. Secretary of State John F. Kerry has warned that the United States and world powers negotiating with Iran were ready to walk away if Tehran cannot accept an accord that would satisfy the West and its allies.

After 15 months of intense discussions, much uncertainty still hangs over negotiations between Iran and six world powers, the report said.

A senior member of the Saudi royal family said Monday that whatever arrangement U.S.-led negotiators reach with Iran over its nuclear program, Saudi Arabia would want to enjoy the same benefits.

That, in turn, could deteriorate into a regional nuclear race, Prince Turki al-Faisal told the BBC.

“I’ve always said whatever comes out of these talks, we will want the same,” said the prince, who previously served as Saudi Arabia’s intelligence chief and as ambassador to the U.S.
“So if Iran has the ability to enrich uranium to whatever level, it’s not just Saudi Arabia that’s going to ask for that,” Turki told the BBC.

“The whole world will be an open door to go that route without any inhibition, and that’s my main objection to this P5+1 [negotiation] process,” he added.