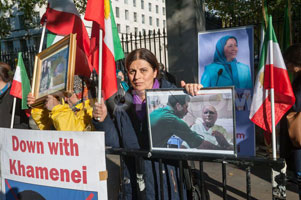 NCRI – The spate of acid attacks on young women and the stabbing of youths by regime-backed thugs is continuing across Iran.

Men riding on motorcycles stabbed a female and a male youth in the back in two separate incidents in Tehran on Monday, December 15.

Two motorcycle riders wearing face masks threw acid in the face of a young woman in Tehran in another horrific attack on the same day.

More than a dozen women and girls have been the victims of acid attacks in the central city of Isfahan in recent weeks, and five university students have been stabbed in
in the southern city of Jahrom.

The students identified one attacker as paramilitary Basij Force member Mohamad Beheshtifar, who was caught on a security camera close to where he attacked one victim.

Beheshtifar is the son of IRGC Colonel Jalil Beheshtifar, who heads the Basij force in Ghotbabad district, in Jahrom County, south of the city of Jahrom.

He said he was motivated to attack after one cleric said the ‘killing of a Bad-Hejab (improperly veiled women) is permissible’ in order to ‘prevent vice’.

Earlier this month the regime’s parliament approved a bill officially putting the members of the Basij paramilitary force in charge of enforcing the dress code in Iran and harassing and repressing women and youths in public under the pretext of ‘Promotion of Virtue and the Prevention of Vice’.

The law institutionalized the work of members of the Basij paramilitaries that patrol streets to enforce the dress code, interrogate couples about their relationships, and other behavior prescribed under the clerical regime’s misogynist laws.

Acid attacks against women in Isfahan and Tehran
Previous articleIranian regime lies to cover up background of mullah behind hostage taking in Australia
Next articleThreat to expedite execution of Iranian hunger strikers ‘deplorable’, Amnesty says