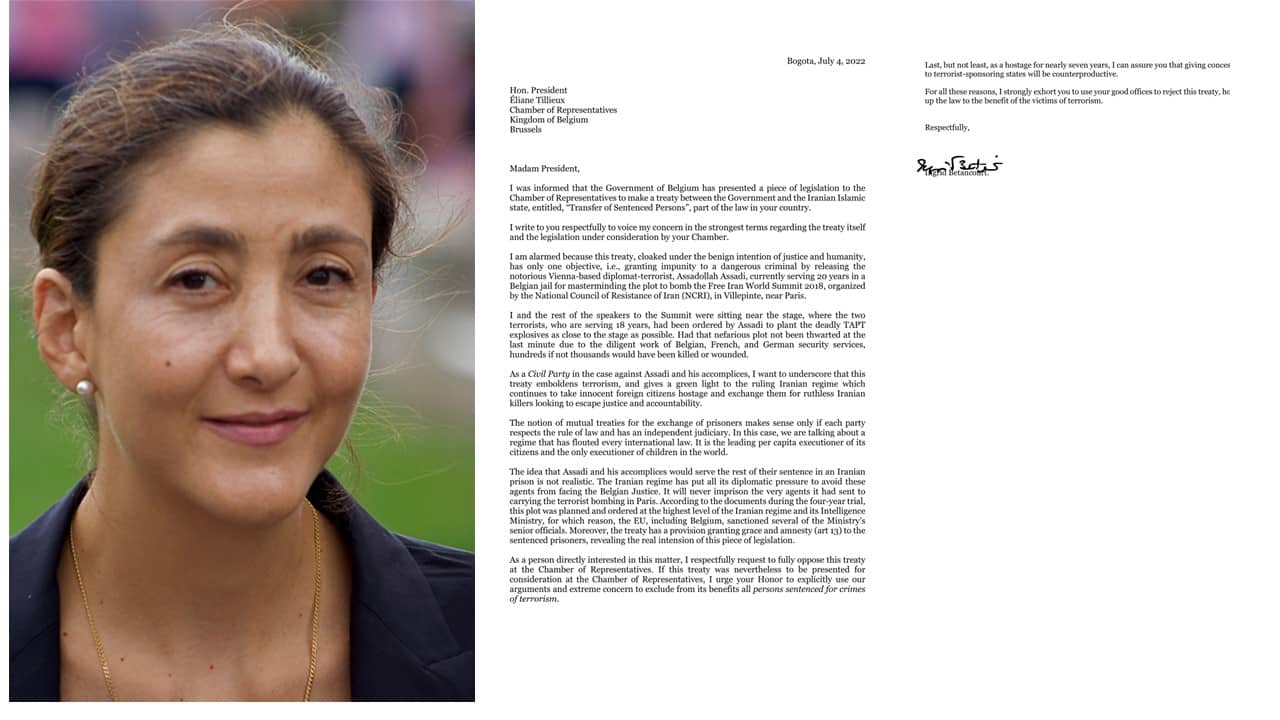 I was informed that the Government of Belgium has presented a piece of legislation to the Chamber of Representatives to make a treaty between the Government and the Iranian Islamic state, entitled, “Transfer of Sentenced Persons”, part of the law in your country.

I write to you respectfully to voice my concern in the strongest terms regarding the treaty itself and the legislation under consideration by your Chamber.

I am alarmed because this treaty, cloaked under the benign intention of justice and humanity, has only one objective, i.e., granting impunity to a dangerous criminal by releasing the notorious Vienna-based diplomat-terrorist, Assadollah Assadi, currently serving 20 years in a Belgian jail for masterminding the plot to bomb the Free Iran World Summit 2018, organized by the National Council of Resistance of Iran (NCRI), in Villepinte, near Paris.

I and the rest of the speakers to the Summit were sitting near the stage, where the two terrorists, who are serving 18 years, had been ordered by Assadi to plant the deadly TAPT explosives as close to the stage as possible. Had that nefarious plot not been thwarted at the last minute due to the diligent work of Belgian, French, and German security services, hundreds if not thousands would have been killed or wounded.

As a Civil Party in the case against Assadi and his accomplices, I want to underscore that this treaty emboldens terrorism, and gives a green light to the ruling Iranian regime which continues to take innocent foreign citizens hostage and exchange them for ruthless Iranian killers looking to escape justice and accountability.

The notion of mutual treaties for the exchange of prisoners makes sense only if each party respects the rule of law and has an independent judiciary. In this case, we are talking about a regime that has flouted every international law. It is the leading per capita executioner of its citizens and the only executioner of children in the world.

The idea that Assadi and his accomplices would serve the rest of their sentence in an Iranian prison is not realistic. The Iranian regime has put all its diplomatic pressure to avoid these agents from facing Belgian Justice. It will never imprison the very agents it had sent to carry out the terrorist bombing in Paris. According to the documents during the four-year trial, this plot was planned and ordered at the highest level of the Iranian regime and its Intelligence Ministry, for which reason, the EU, including Belgium, sanctioned several of the Ministry’s senior officials. Moreover, the treaty has a provision granting grace and amnesty (art 13) to the sentenced prisoners, revealing the real intention of this piece of legislation.

As a person directly interested in this matter, I respectfully request to fully oppose this treaty at the Chamber of Representatives. If this treaty was nevertheless to be presented for consideration at the Chamber of Representatives, I urge your Honor to explicitly use our arguments and extreme concern to exclude from its benefits all persons sentenced for crimes of terrorism.

Last, but not least, as a hostage for nearly seven years, I can assure you that giving concessions to terrorist-sponsoring states will be counterproductive.

For all these reasons, I strongly exhort you to use your good offices to reject this treaty, holding up the law to the benefit of the victims of terrorism.