Iran: A Slap That Hurts the Entire Iranian Regime 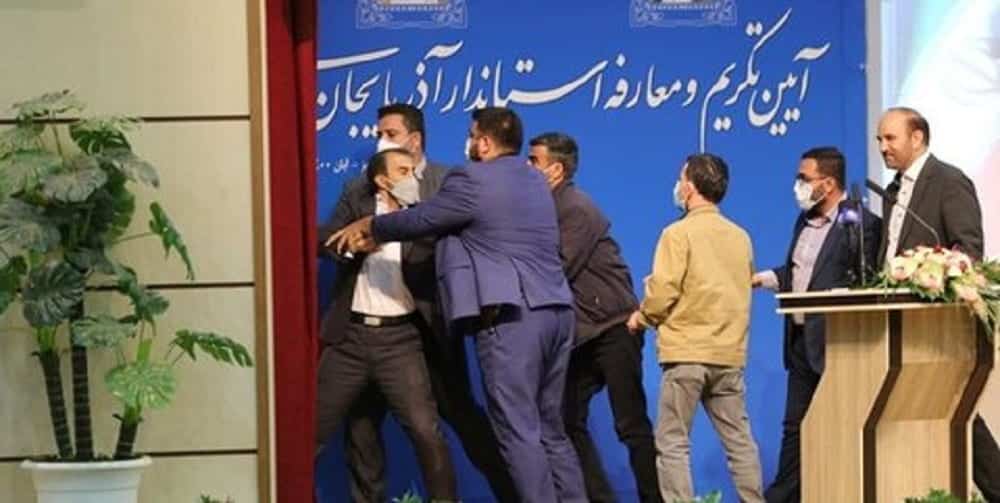 On Sunday, October 23, while a former Revolutionary Guards (IRGC) commander, Brig. Gen. Abedin Khorram was about to start his speech as the new governor of Iran’s East Azerbaijan province: another man stepped on the stage, rushed towards the speaker, and slapped him in the face. The tussling between the assaulted and the assailant was soon interrupted by security forces and organizers who took the latter off stage. As the drama was recorded from start to end, it soon made headlines across Iran and beyond.

Why did it happen?

Contrary to statements from Abedin Khorram that were broadcast via state media, this wasn’t the first encounter between the two. According to the official IRNA news agency, the attacker was IRGC Lieutenant Colonel Jafar Alizadeh, a member of the IRGC Ashoura Corps, which Khorram had overseen. According to the Telegram Group ‘Researching Teachers”, Alizadeh was in the Western Tabriz forces before Khorram’s tenure.

But later on, the Brig. Gen. humiliated Alizadeh by dismissing and insulting him in front of his subordinates and then replaced him with a freshly recruited Lieutenant. Apparently, the IRGC Lieutenant Colonel vowed to retaliate, and he kept his word and took the world as a witness thereof.

According to the Baharnews Telegram group, run by former president Mahmoud Ahmadinejad’s office, Abedin Khorram has been a staunch supporter of Ahmadinejad. In Syria, he was caught and held hostage by ISIS, and for his release a ransom of $57 M was demanded. The regime’s Supreme National Security Council decided to forgo the swap, but Ahmadinejad personally intervened and was willing to pay the ransom. Eventually, when Iran’s foreign minister wanted to hand over the check to the Emir of Qatar, the Emir refused to accept the payment and said he’d helped as a friendly gesture.

According to other state-affiliated sources, IRGC Brig. Gen. Khorram later broke with Ahmadinejad and during the presidential campaign in early 2021, he prevented his former mentor from speaking at a major Mosque in Tabriz. While the tides were turning, Khorram had become a fierce supporter of Ebrahim Raisi. As such, he’s been rewarded with the governor’s post. Some sources have said that Alizadeh is a supporter of Ahmadinejad and called the latest move a warning to Ebrahim Raisi’s front.

After being hit, Abedin Khorram claimed that he didn’t know the assailant and he considered him “on par” with his enemies but would “forgive him.” As he continued his speech on stage, some in the crowd shouted “Death to the hypocrites!” and decried Khorram as a “pro-supreme leader governor.”  In a radio interview the Brig. Gen. also said that he expects the respective officials “to take care” of such a provocation.

After the incident, IRGC Lieutenant Colonel Jafar Alizadeh published an open letter, calling himself a loyal Basij member and a “humble IRGC Colonel” who is proud that he “has rightfully slapped” the “black hypocrite face of governor Khorram.” While mentioning the Supreme Leader, he said that he’s prepared to be publicly tried to show the evidence about why he considers Khorram a traitor.

Accusing Abedin Khorram of corruption, Alizadeh wrote: “First of all, he [Khorram], who was a fellow company of mine in the Ashura Corps in Tabriz, must explain in court how he was able to build a glorious and luxurious palace for himself with his military salary, while he initially was a tenant in the humble organizational houses of IRGC until 1997. And how did he manage to send his children to study in London and the United States?”

“How did billions of tomans of treasury money land in the bank accounts of his wife, who used to sew for the IRGC until 1975?” Alizadeh questioned in his open letter.

The slap has turned into a major spectacle throughout the entire political arena in Iran. The IRGC issued a statement condemning it and taking sides with Abedin Khorram, and it asked the Judiciary to deal with the aggressor and avoid such ‘unfortunate occurrences from happening again.

State-run Jomhuri Eslami newspaper wrote on October 25: “The slapping, which took place in Tabriz, revealed that the clashes have now reached one of the most important security and defense sectors of the country. In this case, the assailant and the beaten were both from the Revolutionary Guards, and this is exactly what should never have happened… It was a slap in the face of the IRGC.”

Arman daily also wrote: “If anyone who is going to get into trouble attacks senior executives and beats them up, as the saying goes, then no one is safe. It won’t stop here. Why should a person reach such a boiling point that he prepares himself for any punishment and takes to such behavior?! How many other people in this province and in other parts of the country are in this state and can repeat the very inappropriate and dangerous behavior of this person? Such movements are unprecedented in our country, and if they are not rooted out, they will be the beginning of emotional and disruptive behaviors… We hope that this kind of behavior will not become common conduct in protest, because it can be very costly for Raisi’s government.”

According to a report from the state-run Aftab-e Yazd newspaper, Alireza Sharifi Yazdi, sociologist and university professor said: “The level of public trust in the country’s officials and managers has drastically dropped over the last 15 years, and public anger has increased. This anger sometimes demonstrates itself in the form of violence and riots in 2017 and 2019, sometimes in refusal to take part in the elections, and sometimes in welcoming such events, which shows the public anger.”

Despite foreign media translating the slap as a ‘security breach,’ there is more than meets the eye. Although this seems to sound like a fight between two old rivals at arms, state media cared enough to understand the complexity and avoided a delicate personal story.

Actual security breaches in the IRGC that led to several assassinations and intelligence theft of highly secret documents had already put on display the all-time low morale within the ranks of the Corps. The factional feud in the organization is just another indication that the paramilitary force once willing to storm Iraq and roll through minefields in the tens of thousands has become increasingly corrupt and wouldn’t be able to withstand serious confrontation.

While both former IRGC officials claim to be loyal to the supreme leader and accuse each other of being a hypocrite — a pejorative that state officials use for their arch-foes, the People’s Mojahedin Organization (PMOI/MEK) — the aggressor openly called Khorram out for his corruption and invited him to court. The very fact that he chose to publicly attack the governor who has good ties with the administration reveals that he had no fear of prosecution. He most certainly knew how he could use the public outrage against the IRGC and the administration to be left unharmed.

Popular uprisings in recent years have rendered the IRGC’s nerves and morale thin. Sanctions have shattered its ranks, and state media is warning about social consequences for a good reason. Iranians are fed up with the corrupt and oppressive apparatus that is keeping the vicious clerics in power. The reality on Iran’s streets and the intertwined political crises Tehran is facing left the supreme leader no other choice but to eliminate many former partners that used to argue on strategic decision making.

He installed a mass murderer as president, consolidated all branches of power by loyal elements, and appointed IRGC commanders to the most crucial posts. He wanted to make sure he wouldn’t face the slightest disagreement while fighting an uphill battle so he could cope with the storms to come. The Lieutenant Colonel might have intended to take personal revenge, but he unintentionally has slapped the face of an entire regime.