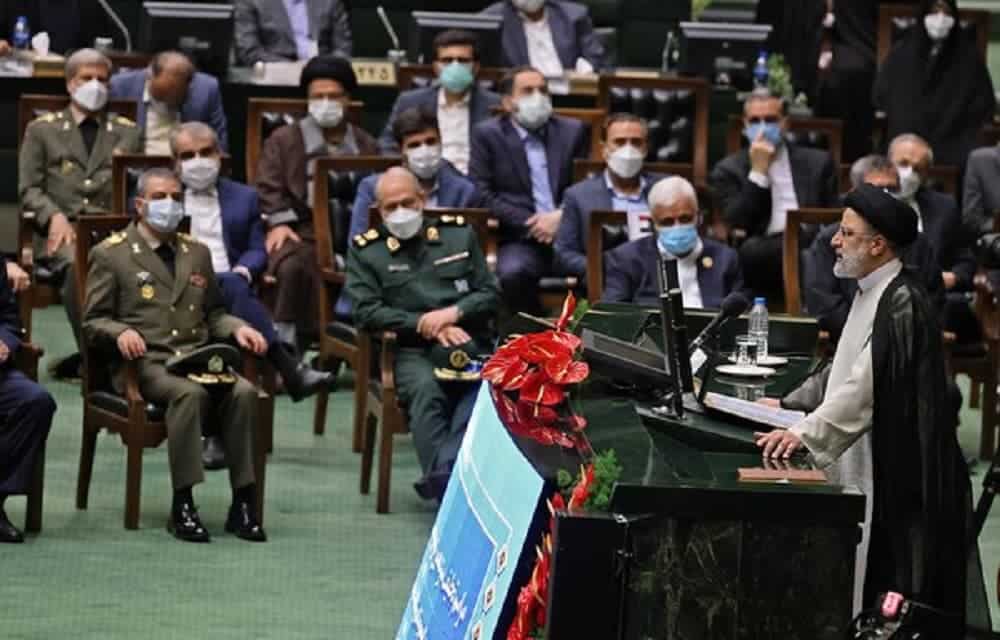 The Iranian regime President Ebrahim Raisi’s cabinet is packed with veterans of the regime’s brutal security apparatus, more so than any other cabinet in the past 40 years. The regime’s unambiguous pivot toward greater suppression and terrorism is a function of the conspicuous panic harbored by the mullahs’ Supreme Leader Ali Khamenei and his regime over looming social unrest. As the theocracy’s historical decay hastens, such upheavals can spell the end for an otherwise milquetoast dictatorship.

The most glaring feature of Raisi’s team is the flagrant rise of the most senior former commanders of the Islamic Revolutionary Guard Corps (IRGC), the regime’s Praetorian Guard. In psychological terms, this trend can be presented as Exhibit A when it comes to the mullahs’ frightful reflexive retaliation against five rounds of major nationwide uprisings over the past four years alone.

Indeed, nothing says the regime is panicking more than the fact that the majority of the 19 installed ministers, almost two-thirds, are IRGC veterans. All key portfolios have been assigned to such individuals, revealing the mullahs’ security-conscious mindset.

But that’s not all. Outside of the ministries, some key cabinet posts are also dominated by ex-IRGC functionaries. For example, Brig. Gen. Mohsen Rezai, former commander-in-chief of the guards, has been tapped as Raisi’s deputy for economic affairs. Another commander, Massoud Mir Kazemi, is the head of the budget management office. The regime’s special envoy for Afghanistan is a former member of the terrorist Quds Force.

The seemingly ubiquitous presence of the IRGC goes beyond the cabinet. A number of appointed governors, especially in restive provinces, are also former IRGC officials, including the governors of Boushehr, Hormozgan, Eastern Azerbaijan, and Khorasan Razavi.

All this explains why an unprecedented number of Raisi’s cabinet members, including Raisi himself and at least 12 others, are sanctioned by either the US, the EU, or the UN, or in some cases a combination of all three. Eight of them are on the US sanctions lists due to terrorism, human rights violations, or involvement in Tehran’s nuclear program. Two of the IRGC veterans, the interior minister Vahidi and deputy of economic affairs Rezai, are also on Interpol’s most-wanted lists for terrorism.

The IRGC itself has been designated by the United States as a Foreign Terrorist Organization. So, by that measure alone, the regime’s cabinet is completely overtaken by well-known terrorists and international undesirables.

The infiltration of a growing number of senior IRGC insiders and security apparatchiks is an unmistakable symptom, a frightened reaction, and a powerful barometer, all at once.

It is an unmistakable symptom of the dictatorship’s inherent inability to cope with a deepening myriad of socio-economic crises; It is a frightening reaction to entrenched social disdain, increasingly surfacing infrequent and ferocious uprisings; And, it is a powerful barometer of the regime’s rapid rate of decline.

The regime’s antagonistic posture should be matched by a firm and resolute policy on the part of Europe and the United States. Otherwise, the theocracy will sense weakness and feel more emboldened to implement its increasingly desperate agenda.

Previous articleIran News in Brief – October 27, 2021
Next articleIran: A Slap That Hurts the Entire Iranian Regime