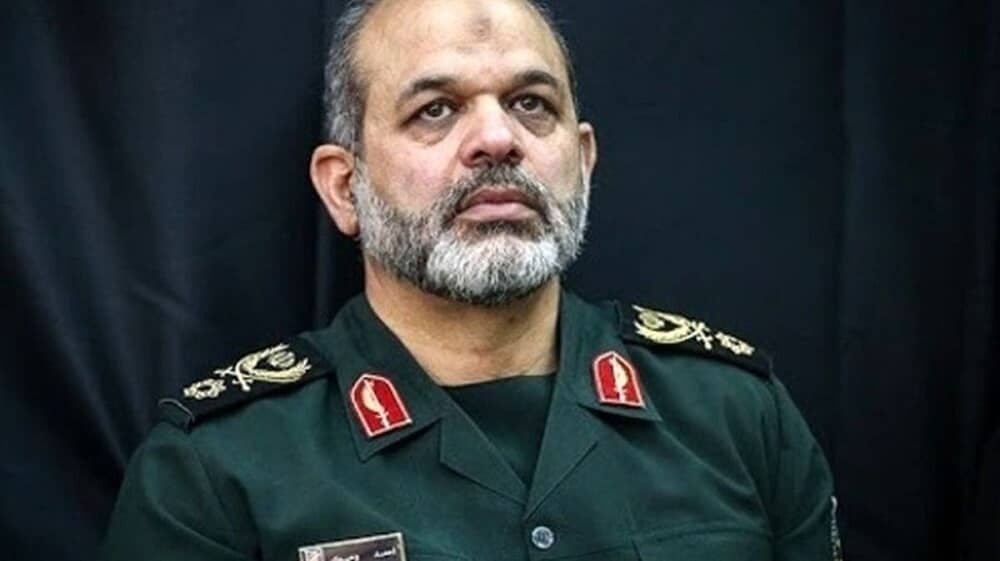 Last week, the Iranian regime’s parliament approved of Ebrahim Raisi nominees to head various cabinet ministries. The entire cabinet consists of thieves and terrorists, but Interior Minister Ahmad Vahidi stands out as one of the most appalling appointments. He is subject to international arrest warrants for his involvement in Iranian regime terrorism.

Ahmad Vahidi was born in June 1958. His birth name is Ahmad Shah Cheraghi. He has been one of the top commanders of the Revolutionary Guards (IRGC) for much of his career. In 1988, when the IRGC’s Quds Force was formed, Vahidi became its first commander.

The Quds Force, or Quds Corps, officially operates outside of Iran. However, in times of crisis, such as the November 2019 popular uprisings, they are brought in to suppress uprisings and attack the Iranian people.

The National Council of Resistance of Iran (NCRI) published a detailed report about the Quds Force, which can be found here.

Vahidi was also the Minister of Defense in Mahmoud Ahmadinejad’s government. He later became a member of the regime’s Expediency Council and head of its political, defense, and security commission.
Vahidi was one of the officials who founded the IRGC’s Intelligence unit in the 1980s and he closely worked with the IRGC’s then-commander Mohsen Rezaei.

In 1981, when Rezaei became the IRGC commander, Vahidi became his deputy in charge of the IRGC Intelligence unit. Vahidi particularly focused on organizing the regime’s terrorist activities abroad and supporting the mullahs’ proxy groups. Vahidi was a mentor to Imad Mughniyeh, a top commander of Hezbollah who was assassinated in 2008.

As mentioned before, Vahidi was the first commander of the terrorist Quds Force. The Quds Force has since played a key role in political assassinations abroad, whether alone or in coordination with the Ministry of Intelligence and Security. Vahidi oversaw several of these terrorist attacks until 1997.

Vahidi has also established a number of the IRGC’s garrisons responsible for organizing terrorist activities, including:
– IRGC Ramadan Garrison, a framework for part of the IRGC’s terrorist operation outside Iran
– IRGC Bilal Garrison, which is in charge of terrorist operations abroad.
– IRGC Al-Ansar Garrison, which is tasked with spreading terrorism in Iran’s neighboring countries and was responsible for attacking the Iranian opposition’s headquarters in Pakistan in 1987.

Vahidi separated the oldest and most experienced intelligence cadres of the IRGC, mainly those of the Ramadan garrison, and transferred them to the Quds Force. He also centralized all terrorist operations by the IRGC in Quds Force. Mohsen Rezaei said that the Quds Force’s goal is to form an “Islamic International Army.”

The NCRI’s report elaborates upon this mission as follows:

“The most important operational areas of the Quds terrorist force at the beginning of its establishment. Following the end of the Iran-Iraq war, the terrorist [Quds] force expanded its activities to other countries. In the 1990s, it was mainly in Lebanon and the Republic of Bosnia and Herzegovina.

• Lebanon: With extensive support for the Hezbollah terrorist group and efforts to further influence the Lebanese government and security structures.
• Syria: Supporting Assad’s dictatorship, including the formation of pro-Syrian militias and the deployment of tens of thousands of militants in the form of the Fatemiyoun brigade of Afghan mercenaries, Zainebiyoun brigade of Pakistani mercenaries, and Abolfazl’s brigade of Iraqi mercenaries.
• Iraq: With the establishment of a militia group called Al Hashd-al Sha’bi, the model of Basij militias in Iran, Iran is trying to establish closer links with Iraq and control relations with the Iraqi Kurdistan region to control and suppress Iranian Kurdish forces in Iraqi Kurdistan.
• Yemen: Supporting the survival of the puppet Houthi regime in the capital Sanaa against the legitimate government, in conflict with Saudi Arabia.
• Afghanistan: Supporting Shiite groups and armed groups close to the regime and gaining more influence in the Afghan government.
• Palestine (Gaza Strip): All-out support for the terrorist groups Hamas and Islamic Jihad, the destruction of the Middle East peace process, and the weakening of the Palestine Liberation Organization (PLO) and the Palestinian government led by Mahmoud Abbas.

Despite the particular focus of the Quds terrorist force on the countries mentioned above, the Revolutionary Guards terrorist organization is also involved in terrorist activities in all countries of the Middle East, from North Africa to the Persian Gulf. Among these terrorist interventions and activities, we can mention the conflicts between the regime and the Bahraini government, in which the Quds Force plays an active role. In recent years, there have been numerous reports of the arrest of members of the Quds terrorist force and weapons and ammunition in the Persian Gulf’s Arab states, especially in Bahrain.”

Vahidi and the AMIA Bombing

On July 18, 1994, a massive truck bomb outside a Jewish center in Buenos Aires, Argentina, killed 85 people and left more than 200 injured. On August 10, the Iranian Resistance declared that the bombing had been planned in Tehran by the IRGC, the Intelligence Ministry, and the Foreign Ministry and approved by the regime’s Supreme National Security Council.

In 2006, Argentinian federal government prosecutors officially filed a lawsuit against the perpetrators of this attack, including Ahmad Vahidi. Argentine prosecutor Alberto Nisman, who was investigating the AMIA bombing, underlined that Vahidi was involved in planning and carrying out the operation. Nisman was assassinated in his home before going to court.

Despite the Interpol red card, Mahmoud Ahmadinejad nominated Ahmad Vahidi as his Minister of Defense in August 2009. In June 2011, after Vahidi visited to Bolivia to attend a defense conference upon the invitation of the Bolivian Defense Minister, the country faced protests from Argentina. As a result, the Bolivian Foreign Minister apologized in a letter to his Argentine counterpart and Bolivia asked Vahidi to leave the country.

Vahidi continued serving as Minister of Defense until 2013.

Khamenei handpicked the regime’s parliament, appointed Raisi, and personally ratified his ministers in a bid to consolidate his regime facing Iran’s restive society. When Ebrahim Raisi was announced as the winner of the regime’s sham presidential election, Amnesty International’s Secretary General Agnès Callamard said: “That Ebrahim Raisi has risen to the presidency instead of being investigated for the crimes against humanity of murder, enforced disappearance, and torture, is a grim reminder that impunity reigns supreme in Iran.”

Raisi is notorious for his role in the 1988 massacre of 30,000 political prisoners. His ministers and government officials are criminals like Vahidi. Their appointment by Raisi once again shows how “impunity reigns supreme” in Iran under the mullahs’ regime in light of the international community’s inaction. This cabinet once again shows the regime in Iran is dedicated to human rights violations inside Iran and the export of terrorism abroad. Raisi and his ministers, such as Vahidi, should not be welcomed by world powers but should be tried for crimes against humanity.