NCRINational Council of Resistance of Iran
EN FR DE IT AR ES AL
HomeIran News NowWho Is Hossein Amir-Abdollahian: A Diplomat or a Field Agent?
Iran News NowPublications - News and ArticlesSpecial Reports-News and ArticlesLatest News on Iranian TerrorismEbrahim Raisi - News And ArticlesNews- Find what is going on In IranWho is who? 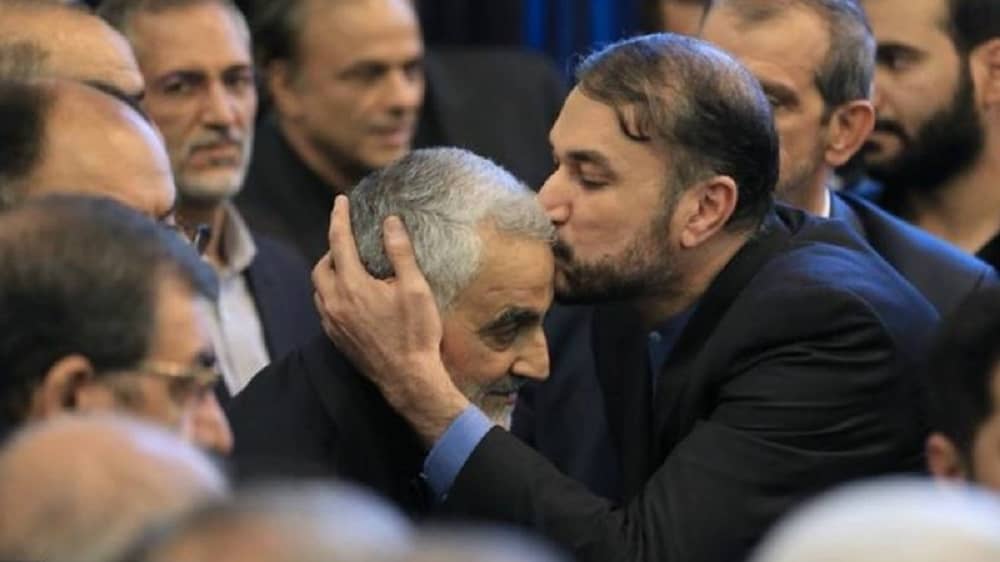 He has been given many labels: a career diplomat, an anti-Western liaison, and Supreme Leader Ali Khamenei’s go-to advisor on ‘East-oriented policy’. For many years, Hossein Amir-Abdollahian has been an aide to the criminal commander of terrorist Quds force, Qassem Soleimani, and the representative of the Quds Force within the ministry of foreign affairs. He was deputy to Foreign Minister Mohammad Javad Zarif and helped offer a ‘goodwill gesture’ to the Obama Administration when Khamenei adopted the strategy of so-called “Heroic Flexibility”. But as the Iranian regime’s media once said, Amir-Abdollahian’s position tells more about the future than the past.

In 2007, when Tehran-backed militias were targeting coalition forces across Iraq, Hossein Amir-Abdollahian was part of the Iranian regime’s negotiating team at the Iran-Iraq-US trilateral meeting in Baghdad. The meeting was held at the request of the Americans with the intention of stabilizing a situation in Iraq that they described as dangerous. The talks ended after three sessions without result. One of the Iranian delegation’s main demands was that the US military hand over the People’s Mojahedin (PMOI/MEK) members from Camp Ashraf. The American delegation refused.

During Ahmadinejad’s tenure, Amir-Abdollahian was the Deputy Foreign Minister for Arab Affairs and the Quds Force liaison with regional countries. He met regularly with Hezbollah chief, Hassan Nasrallah and Syrian dictator Bashar al-Assad, and other regime operatives in the region.

From 2011-2016, Amir-Abdollahian was Deputy Foreign Minister for Arab and African Affairs under Ali Akbar Salehi and was responsible for foreign ministry activities in the region, especially Iraq, Syria, and Yemen. He also took part in negotiations with the P5+1 on the regime’s advancing nuclear program and made sure the Quds Force was always kept in the loop. 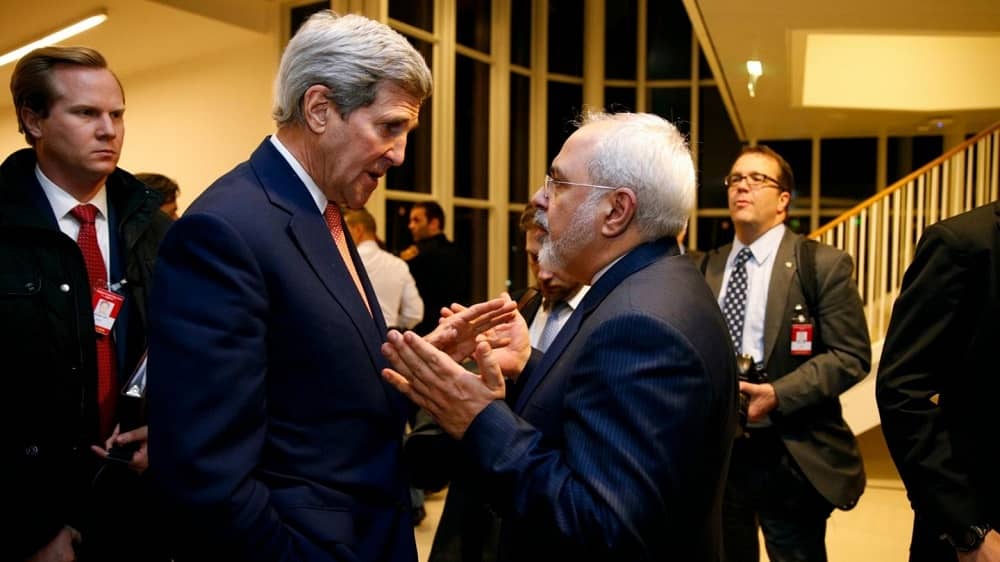 On June 12, 2016, Jawad Zarif traveled to Norway for two days, attending the Oslo Summit and meeting 70 minutes with Foreign Secretary John Kerry. Back from Norway, Zarif promoted Jaber Ansari, then-spokesperson of the Foreign Ministry, into Amir-Abdollahian’s position and selected Bahram Qasemi as the new spokesperson.

On June 20, news broke that Bahrain had stripped a Shiite cleric named “Ayatollah Sheikh Issa Qassim” of his Bahraini citizenship. This stirred a wave of condemnations within the Iranian regime, and Qassem Soleimani, then-commander of the Revolutionary Guards’ Quds Force, said Bahrain had crossed a red line that could lead to war and the overthrow of the Bahraini Al Khalifa.

Around that time, media outlets and researchers concluded that a core topic of Zarif’s meeting with US Secretary of State John Kerry in Oslo was the dismissal of Amir-Abdollahian as a goodwill gesture from the Iranian regime’s foreign ministry. According to sources, the decision was approved by the Supreme Leader. Apparently, Soleimani’s statement against Bahrain was supposed to convey a message of defiance against the decision and was also approved by the Supreme Leader to balance the Foreign Ministry’s decision for the regime’s loyalists and to reassure regional proxy groups that Tehran would still support them.

In late March 2016, Hassan Rouhani wrote a confidential letter to the Emir of Kuwait calling for talks to resolve disputes with Arab countries. The Kuwaiti newspaper Al-Rai wrote that Mohammad Khalid, Kuwait’s Deputy Minister and Minister of Interior, delivered the letter to four Arab countries. According to Arab media on April 1, 2016, in response to Rouhani’s letter, the Arab countries had asked for a series of measures, including the replacement of Amir-Abdollahian, Zarif’s deputy for Arab-African affairs.

On June 19, 2016, Al-Monitor, an outlet with questionable ties to Tehran, wrote about Amir-Abdollahian’s dismissal and speculated how this move would lead to an extension of the Iran nuclear deal aimed at curbing the regime’s regional ambitions.

On June 19, 2016, Al Hayat wrote: “The Iranian Foreign Ministry took action to oust Amir-Abdollahian after Zarif met with John Kerry in Oslo last week. Jaberi Ansari replacing Amir-Abdollahian is one of the results of that meeting.”

According to Mohammad Abdollahi, the editor-in-chief of Hamshahri, the removal of Amir-Abdollahian confirmed the Rouhani government’s ‘non-revolutionary positions’ and set the stage for Western restrictions on Iran’s regional activity.

According to Hoshdar News on June 23, 2016, Mehdi Mohammadi (an expert close to Saeed Jalili) said: “The dismissal of Hossein Amir-Abdollahian is telling us more about the future rather than the past. It is clear that he played an intrusive role in a project that was considered an emergency by the administration. That project is related to five issues:

“Within the Ministry of Foreign Affairs, Hossein Amir-Abdollahian alone has been an obstacle to the creation and progress of this project.  His dismissal shows that the gentlemen have concluded that they have no time to waste. Therefore, the next developments will follow quickly.”

On June 21, 2016, the BBC Persian published an article with the headline “Who is Qassem Soleimani’s statement targeting?” It said: “At the heart of these speculations is the chronology between the statement of General Soleimani and the removal of Hossein Amir-Abdollahian, Iran’s Deputy Foreign Minister for Arab and African Affairs, who was close to the Quds Force and was known as a “revolutionary diplomat.”

“Qassem Soleimani’s statement could be a reaction to the removal of Amir-Abdollahian, and a stick in the wheel of the Rouhani government’s policies,” BBC Persian added.

According to al-Arabiya, Amir-Abdollahian was close to the IRGC and played the role of “a liaison” between the foreign minister and the commander of the Quds Force. The report stated that the IRGC opposed the relocation of Amir-Abdollahian, and after his removal, Qassem Soleimani’s statement indicated that he would directly resort to “War Diplomacy”.

On June 23, 2016, Afkar News wrote: “It is quite clear that this (Soleimani’s) statement has been written in coordination with knowledgeable sources”, which was an indication that Supreme Leader Khamenei had been on top of things.

On June 22, 2016, an IRGC internal political leaflet referred to Amir-Abdollahian’s role in the regime’s regional strategy as follows: “The Ministry of Foreign Affairs, which diplomatically supported ‘the resistance’, was able to carry out some of its duties thanks the efforts of Amir-Abdollahian so that the Lebanese Hezbollah, Afghan Fatemiyoun, Pakistani Heydariyoun, and Zeynabiyoun fighters became a factor that hindered the new U.S. Middle East agenda in the region.”

“Although these negotiations (about an expansion of the JCPOA) have been denied by the Foreign Ministry, it later became clear that some negotiations between Iran and Saudi Arabia have been taking place in Muscat. But these negotiations failed because of Amir-Abdollahian’s strong and stubborn obstruction,” added the IRGC internal document.

In accordance with the instructions by the regime’s Supreme National Security Council, the IRGC Quds Force was responsible for the foreign policy of the war-torn countries in the region. The Quds Force was supposed to frame and implement its decision-making in synchronization with the Ministry of Foreign Affairs, the Expediency Council and the National Security and Foreign Policy Commission of the regime’s Parliament. In practice, however, the IRGC Quds Force acted on its own. It appointed the ambassadors of the countries under its mandate and through Amir-Abdollahian, it actually imposed its policies on the Foreign Ministry. 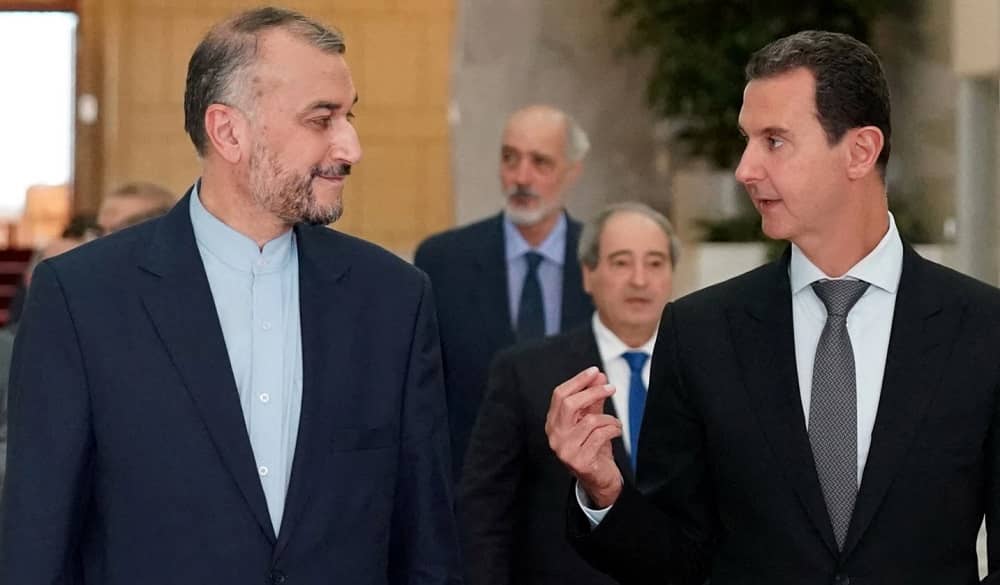 Following a series of political and military failures in the region (particularly in Syria and Iraq in 2015), and especially due to the regime’s unprecedented isolation in the region, Javad Zarif repeatedly pledged to Supreme Leader Khamenei. It has been reported that Khamenei accepted Javad Zarif’s proposal that the Supreme Security Council would be responsible for regional policymaking as of May 2016. Accordingly, on June 9, 2016, the Secretariat of the Supreme National Security Council announced in a press release that Ali Shamkhani, secretary of the Supreme Security Council, would be coordinating Iran’s political, military and security actions with Syria and Russia. Once the decision was made at the highest level, Amir-Abdollahian was dismissed.

In 2016, upon removal from the ministry, Zarif offered Amir-Abdollahian the ambassadorship to Oman. But Soleimani’s man declined the position and chose to become a special aide to Ali Larijani, the speaker of the regime’s Parliament on international affairs. He also became Secretary-General of the Permanent Secretariat of the International Conference in Support of the Palestinian Intifada and Managing Director of Palestine Strategic Dialogue. Under Mohammad Bagher Ghalibaf, he continued to act as a special aide on foreign policy.

Amir-Abdollahian’s anti-MEK hysteria is another reason for his appointment to the regime’s Foreign Ministry. “Westerners should be shocked to know that we will not stay in the current one-way tunnel (JCPOA) at any cost,” he said after some sanctions were made public against the regime for the foiled terrorist plot in Villepinte in 2018. “As a safe haven [for the MEK] Europe must now receive a sensible, wise, but shocking message.”

Prior to taking office and striking a conciliary tone toward Arab countries, he has used a different language. He also blamed the United States for using the Covid-19 virus as a biological weapon against Russia and China.

Since Hossein Amir-Abdollahian has been confirmed by the regime’s parliament, he is poised to represent the Supreme Leader’s view that Iran has to mistrust the West and should adopt a neighbor-centered and Asia-oriented approach. During his confirmation hearing, he said: “In western Asia, we seek to institutionalize the achievements of the ‘Axis of Resistance’ and, in the east, we seek to use the capacities of emerging economic powers to develop our economy and international trade”.

No matter how international institutions, think tanks, or foreign ministries around the world might want to think about Hossein Amir-Abdollahian, at the end of the day, he has represented Khamenei’s doctrine that the Islamic Republic is the center of the Middle East and should achieve this by leveling itself up through proxy groups in each and every country. It doesn’t matter whether he will or will not be taking part in Vienna talks, attending regional negotiations, or filling other ordinary diplomatic roles. Amir-Abdollahian has been and remains Soleimani’s man for ‘War Diplomacy’. 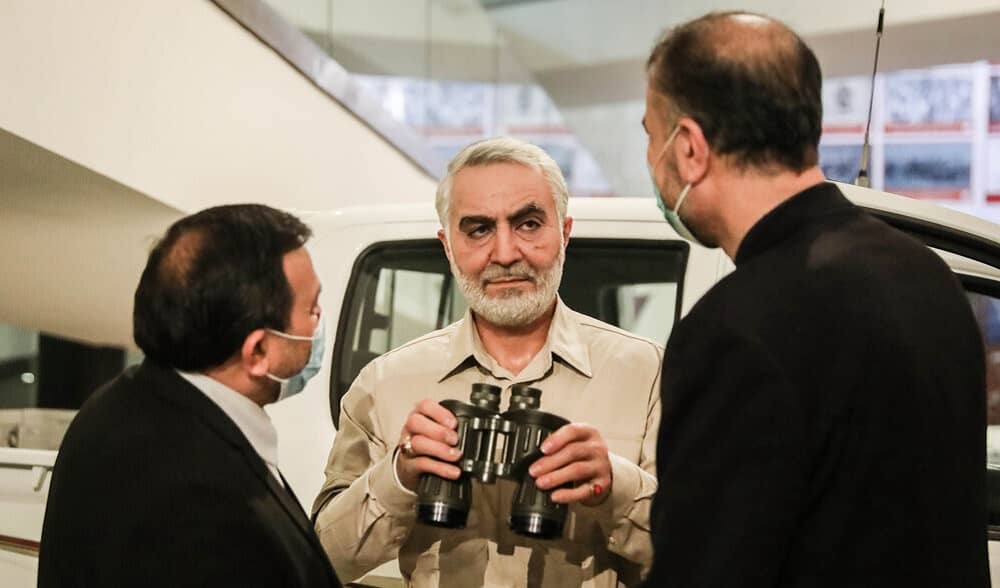 Previous article
Iran 1988 Massacre: Who is Mostafa Pourmohammadi?
Next article
Iran: Ebrahim Raisi Is the Greatest Criminal in an Administration Full of Them