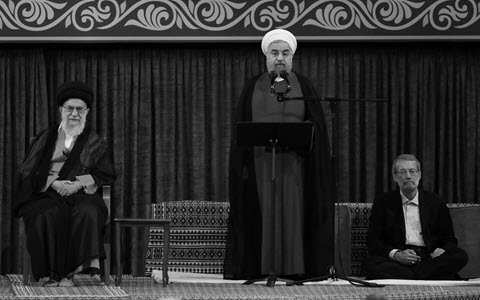 NCRI – On Tuesday August 8, 2017, Hassan Rouhani submitted the list of his ministers and cabinet members to regime’s parliament. The list, in which more than half of previous ministers have been replaced, is actually the result of a balance of power between regime’s rival bands.

The question, however, is whether the cabinet reshuffle puts forward a specific, strategic way out of the crises the regime is inundated with. The signs, data, and remarks made by regime’s officials and experts, however, give a negative answer to this question.

The new cabinet’s ‘band structure’ shows that it’s not been formed to respond to the country’s contradictions and problems, but only to address the demands of regime’s rival bands, so much so that even regime’s own experts acknowledge that the current problems are so serious that none of them could be resolved through a cabinet reshuffle.

“I have no hope for the 12th cabinet”, says a regime expert, adding “I believe that as long as we have an infected economy which is widely influenced by capital, it won’t be significantly affected by anyone. An efficient cabinet is the one with a strategy and plan, the terms governments in Iran have nothing to do with.” (Fararoo state website, July 31, 2017)

Also a regime’s political expert maintains that “economic recession is not an issue that can be resolved by merely replacing ministers. Likewise, having 6-8 million unemployed is not going to be over by replacing the labor minister. The economic slowdown won’t be fixed by replacing the economy minister. Even if the very Adam Smith was the minister of such economy, he wouldn’t be able to fix our economic problems.” (Afkarnews website, July 25, 2017)

To further clarify the issue, the experts point to government’s budget deficit problem, saying “when a ministry is not adequately funded, what the minister is capable of doing?”

Another important obstacle is the deep, widespread corruption which has totally engulfed the regime. The dimensions of the corruption are so huge that even if the current budget is raised 10 or 100 times, it still won’t be able to fix any part of this economic mess. As a matter of fact, the country’s revenues from selling oil alone reached an incredible 700 billion dollars during Ahmadinejad’s two terms in office, surpassing the country’s total oil revenues ever since oil exploration and extraction began a century ago. Meanwhile, what Iranian people got out of these huge revenues was nothing but more deprivation and a deteriorated economic situation.

So, the problem is a structural one; a faulty, extremely corrupt state-structure which is not going to be fixed through cabinet reshuffles or even change of governments.

But in the absolute totalitarian Velayat-e-Faqih system, the issue is even deeper than a structural problem. It’s rooted in the very nature of the regime, which is too far from Iranian society’s historical characteristics and the requirements of the current era. As a result, the regime is forced to dedicate the country’s whole facilities and wealth to preserve its anti-historical existence and maintain its security, while meeting other needs and resolving contradictions and other problems are only regarded as minor issues.

It would suffice in this regard to take a look at Rouhani’s new cabinet and some of its ministers. Under public opinion pressure, both domestically and internationally, Rouhani was forced to replace Mostafa Pourmohammadi, who was revealed and widely despised as one of 1988 massacre’s main executioners. Nonetheless, Rouhani gave Pourmohammadi’s seat to Alireza Avayee, another executioner actively involved in the 1988 massacre, with his crimes and murders as Southwestern oil rich province Khuzestan’s so-called Revolutionary Prosecutor General being well known across the province.

Avayee’s advantage over Pourmohammadi is that he was not satisfied with only issuing death sentences, but he also personally hanged young and teenage PMOI members, shot them through firing squads, or delivered them coup de grace.

Replacing one executioner, Pourmohammadi, with another one, Avayee, shows that regime’s nature is tied to execution, killing, and massacre of political prisoners. Rouhani and Khamenei have insisted to send this message, domestically and internationally, that replacing Pourmohammadi should by no means be regarded as holding back from executions and apologizing for the massacre.

The same is also true about all cabinet members, most of which are among the veterans of regime’s intelligence ministry and other repressive, stifling organs.

Meanwhile, we see how Khamenei sets out conditions in his validation decree for Rouhani and his cabinet, with Khamenei’s head of judiciary Amoli Larijani also stressing on those same directives, including paying attention to people’s livelihood and having widespread interactions with the world, as a roadmap not only for president and his colleagues, but for all regime’s bodies and forces as well.

It goes without saying that making such useless generalized comments are not going to resolve any issue or put forward a way out of regime’s dangerous situation, to which Khamenei refers as ‘decisive days’ while speaking at Rouhani’s validation ceremony. In his speech, Khamenei even refused to once again point to his useless ‘resistance economy’ nonsense, on which he used to repeatedly emphasize in the past.

While Khamenei fraudulently raises the issue of people’s livelihood, he knows better than anyone that the country’s economic foundations have collapsed and production has been devastated, so that according to his own acknowledgements in March 2016, more than 60 percent of the country’s production capacity has been shut down. Besides, with new US sanctions in place, it would be impossible to transfer even one dollar through international banks. Under such conditions, regime has no option but to more than ever put its hands into people’s pockets and rob them even of the least things they can afford, so as to respond to its main concerns, namely preserving its existence and security, paying the heavy costs of its regional interventions and continuing with its war and killing in Syria, Yemen, and Iraq.

So, neither Rouhani, who raises the nuclear deal as the only model that’s going to resolve regime’s crises, nor Khamenei , who speaks of people’s livelihood, interaction with the world, and regime’s internal unity, can come up with a plan or idea to save their regime.