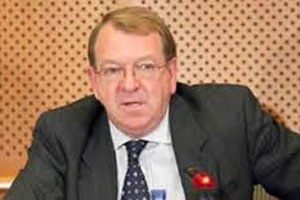 “I have today received a letter and many deeply disturbing photographs from Mrs Leghah Vardi, who is a member of the Iraqi Parliament and President of committee of immigration and displaced in parliament of Iraq, in which she points to the genocidal campaign being waged by Shiite prime Minister Nouri al-Maliki against the predominantly Sunni population of Fallujah in Anbar Province. Mrs Vardi has had to go into hiding for fear of reprisals from the autocratic and vindictive Maliki. In her letter she states that explosive barrels are causing widespread death and destruction in Fallujah, saying “The explosive barrels which are being made in one of the army bases in Iraq, contain over 250 Kg of TNT and since they lack any guiding systems, they land blindly and have created massive damage to buildings, with hundreds of civilians getting killed.”

In her letter to Struan Stevenson Mrs Vardi continues: “The government also uses some missiles leading to many victims amongst civilians, women, children and the elderly and has destroyed many non-military buildings, infrastructure, schools, hospitals and mosques. The continuation of this operation has resulted in the displacement of many families, a total of 1 million homeless inside and outside the province. They are living in terrible conditions and lack basic living requirements. Diseases are spreading amongst children.”

The Iraqi MP concludes her letter by stating: “It is clear that this is a massacre against the civilian population of Anbar province, especially in Fallujah under the pretext of fighting against terrorism (Daesh). Therefore we call on the UN and EU to send delegations to investigate and if necessary send an international force linked to the UN to protect the civilians and stop atrocities carried out by government forces and sectarian militias affiliated to the government in Baghdad and in this way would play their humanitarian and legal role in protecting the civilian population in Anbar and especially in Fallujah.”

After reading the letter Struan Stevenson said “Leghah Vardi MP has risked her life to bring this information to the attention of the West. We must not ignore her pleas for help.

Nouri al Maliki is waging all-out war on men, women and children in Anbar Province, simply because they are Sunni. It is shameful that the West choose to ignore this genocide and worse still, actively support Maliki to the point of the US even supplying him with weapons, which he uses to kill his own people. The UN, US and EU seem to have fallen hook, line and sinker for his assertion that he is fighting against al-Qaeda affiliated terrorists (Daesh). The photographs of dead and dying children in Fallujah expose this as a blatant lie.”

Previous articleAll for Freedom: Huge gathering of Iranians and world dignitaries in Paris in June
Next articleIranian regime lobby: Tehran’s men in Washington