Clinton: Countering Iran and defeating ISIS are not distinct missions 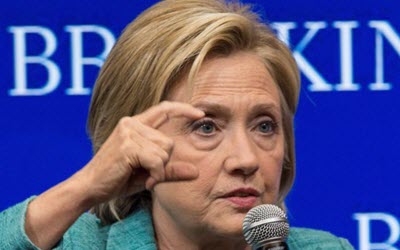 Breitbart, the US news site, reported Monday that leaked e-mails from the Hillary Clinton campaign revealed that the presidential candidate had intended to tell the Brookings Institution that, “Countering Iran and defeating ISIS are not distinct missions – they are intimately related.”

However, after an intervention by campaign chairman, John Podesta, while Clinton confirmed that she supports “a military option” against Iran as a last resort, and accused Iran of propping up the dictatorship of Bashar al-Assad in Syria, she did not utter the line.

In her December 2015 speech to the Brookings Institution, Clinton also discussed the imperfections of the West’s nuclear deal with Iran. She continued to say that the deal had to be “aggressively implemented and enforced,” and that the US approach must be to “distrust and verify.” Clinton also drew attention to Iran’s “provocative behavior,” saying that further sanctions might be necessary.
Breitbart reported that, “The Iranian government has used the Islamic State to expand its influence in the greater Middle East.”

The news site also said that, “Iran funds Shiite militias in Iraq that have been accused of attempted ethnic cleansing, torture, and murder of Arab Sunni civilians in Iraq, and reportedly sent top commander Qasem Soleimani to Iraq in May 2016.”