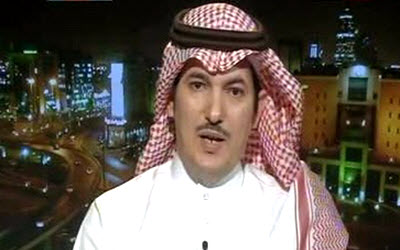 NCRI – Saudi columnist Dr. Mohammad al-Sulami , an expert on Iranian political affairs and the head of the Iranian-Arabic Studies, stated that we should deal with the expansionism of the Mullahs’ regime. The expansionism of this regime is not a sign of strength but of weakness.

Dr. Mohammed Alsulami in an article in Alwatan Saudi Newspaper writes:”in 1978, the revolution was stolen by the Mullahs and Khomeini could establish the political system of “Governance of the Jurist” .Therefore, the “export of revolution” was at the core of the regime’s strategy. The plan, however, resembled more to a dream than a reality. The Iranian regime resorted to its supporters in the region because it was not able to tolerate the dangerous consequences as well as the costs of direct ontentions. Iran’s plan relies primarily on non-Iranians so that they appear in public while the regime is behind the curtains.”

As the head of the Iranian-Arabic Studies puts it, the two major events caused the acceleration of the Iranian regime’s movement in the region. The first incident was the fall of Baghdad when the US invaded Iraq in 2003.Tehran took advantage of the collusions in Iraq .The wrong analysis of Americans about the Iran’s threat gave more opportunities to the Iranian regime as well. It is worth noting that the withdrawal of the Persian Gulf states from Iraq was involved in this matter and thus, the eastern gateway was transformed to a wide space for the expansionist activities of the Iranian regime. Iranian authorities took the time of crisis as an opportunity to achieve two main goals. The first objective is to prevent the collapse of the Syrian regime, and the second is to expand the scope of its presence in the Arabic region; being in the shadow of chaos and turmoil in different countries.

He also added:”Iran’s regime provokes the Shiite minorities in the region so that they oppose the governing policy of their country. The regime uses different strategies and maps to succeed in making expansionist and sectarian plans in the region. The Arabic countries are still passive and they only act upon Iran when Tehran makes the splash in the region. Is there such a fruitful way to deal with the destructive plans of the clerical regime? Are the countries of the region seeking to create alternatives to this approach? Is not it time to talk about the siege of Tehran? The primary issue is not Tehran’s capabilities, but most significantly, the lack of unity and empathy is the main problem. So how long will the divisions and dispersals continue?”

Previous articleMost land violations committed by managers and MPs
Next articleClinton: Countering Iran and defeating ISIS are not distinct missions