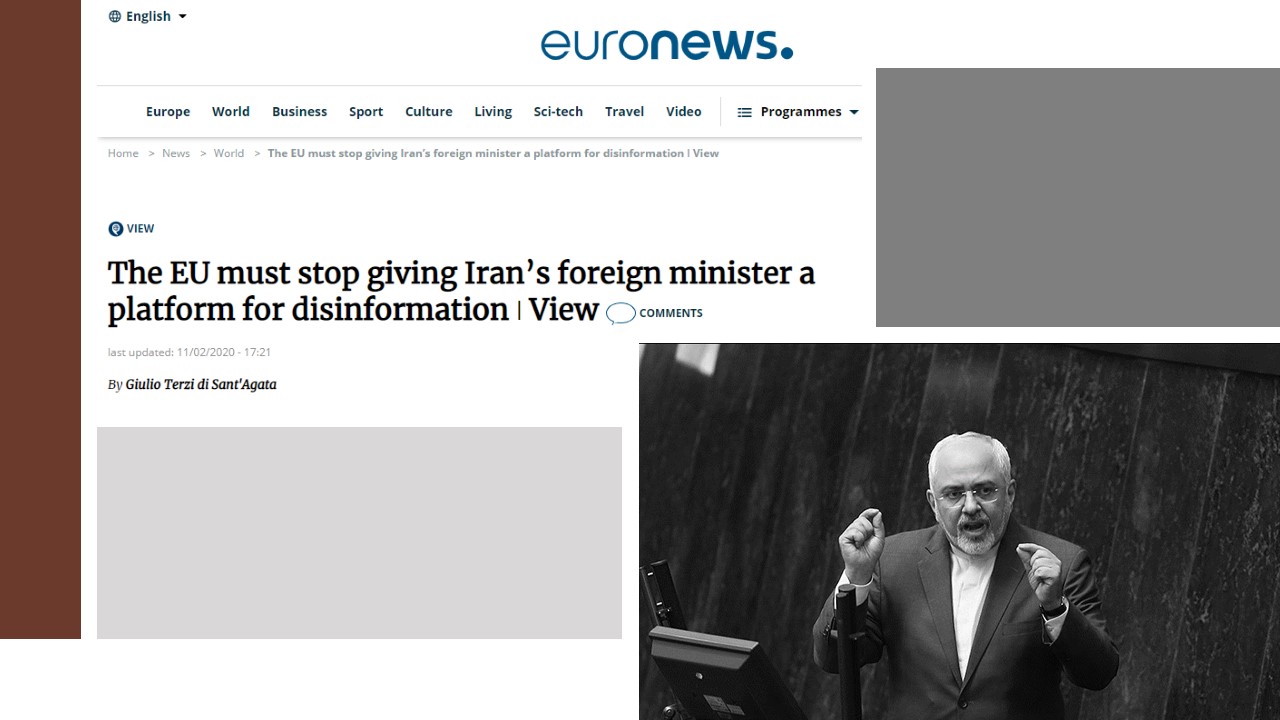 “The Iranian foreign minister, Javad Zarif is expected to attend the Munich Security Conference on 14 February. He may skip the event, as he did with the World Economic Forum (WEF) in Davos last month. If so, the conversations will surely be more productive, being free from one of the most prominent sources of disinformation in the modern world,” wrote Mr. Terzi.

While referring to Zarif’s role as the regime’s chief apologist, Mr. Terzi wrote: “Given Zarif’s role as an apologist for an Islamist theocracy, and the world’s leading state sponsor of terrorism, he should never be invited to such international gatherings.”

Misplaced and Premature Jubilation by an Apologist of the Murderous Mullahs of #Iran https://t.co/LowCOdMHjN#FreeIran #BlackListMOIS #BlacklistRouhani

“Rather than continuing to invite Zarif for open-ended diplomatic talks, EU member states should begin to adopt strategies aligned with the US. The Iranian foreign minister’s movements were severely limited during his last visits to the United Nations (UN) in New York, and in July he was made subject to US economic sanctions,” he added.

While referring to the nationwide Iran protests in November, Mr. Terzi wrote: “In November, Iranian authorities began their crackdown on the most significant protest movement of the last 40 years. Demonstrations quickly spread across the entire country and morphed into unequivocal calls for regime change. Chants like ‘death to the dictator’ and ‘death to Khamenei’ re-emerged after having been popularised in the nationwide uprising in 2018.”

Mr. Terzi also pointed to the leading role of the People’s Mojahedin Organization of Iran (PMOI, Mujahedin-e Khalq or MEK) during the Iran protests and wrote: “Khamenei publicly acknowledged that the movement had been largely inspired and guided by the Mujahedin-e Khalq (MEK) – recognizably the regime’s arch-enemy and the most prominent voice for democracy since the 1979 revolution.”

“Prior to January 2018, Tehran’s propaganda insisted that the MEK posed no real threat to the clerical regime. But that illusion was shattered with the recent civil unrest in November 2019. Approximately 1,500 people were killed by suppressive forces in November, according to Iranian interior ministry figures seen by Reuters. Many were tortured to death after being arrested. So many activists were arrested that some had to be housed in makeshift jails at primary schools and government buildings,” he added.

While referring to the downing of a Ukrainian airliner by the regime’s Revolutionary Guards (IRGC) on January 3, and the subsequent protests, Mr. Terzi wrote: “Tehran has not even tried to provide a credible alternative account of the uprising or the subsequent protests that followed the Revolutionary Guard’s (IRGC) downing of a commercial airliner heading out of Tehran. It has simply dismissed all casualty estimates and waited for international discussions of Iran’s domestic affairs to calm down, to the extent that they are confident this will happen. It is no doubt because they believe that the Western world will eagerly listen to anything Iran’s foreign minister has to say, no matter how obvious that his commentary is geared toward deception and distraction.”

“There are multitudes of egregious Iranian behaviors that the international community can think about when deciding how to deal with Zarif and the regime as a whole,” Mr. Terzi added.

Referring to Zarif’s relationship with the eliminated chief of the IRGC’s Quds Force, Qassem Soleimani, and his support for Soleimani’s terrorist activities abroad, Mr. Terzi wrote: “His long-standing praise of terrorists like the eliminated Quds Force commander, Qassem Soleimani, and Hezbollah leader, Hassan Nasrallah, is indicative of his commitment to defending Iran’s bloodiest force-projection strategies.”

“Zarif is fully supportive of the regime’s terrorist operations, since incidents like the attempted bombing of a 2018 opposition rally in Paris, attended by international dignitaries including President Trump’s personal lawyer Rudy Giuliani and the President-elect of the National Council of Resistance of Iran, Maryam Rajavi, have been channeled through his diplomatic posts,” he added.

Mr. Terzi also shed light on the Iranian regime’s campaign of disinformation and wrote: “Iranian disinformation – much of it reaching the world directly via the foreign ministry – has previously convinced much of the world that there is simply no alternative to dealing with the existing regime on its own terms. Tehran’s hold on power has long been assumed to be so firm that any efforts to undermine it would only lead to war.”

Referring to the regime’s increasing fragility and its imminent downfall, Mr. Terzi wrote: “The Iranian regime is arguably weaker than ever before and is certainly nearing financial bankruptcy. It is also facing an ever-growing challenge from its own people, which it has not been able to overcome, even with the most shocking brutality.”

“Iran’s theocratic system may begin to collapse under the weight of popular demands for a democratic alternative. But the Iranian people still need the support of the international community,” he added.

Mr. Terzi concluded by saying: “Instead of listening to the propaganda of Zarif and his cohorts, the EU should implement the following three steps”: