Health of 14 million Iranian in danger 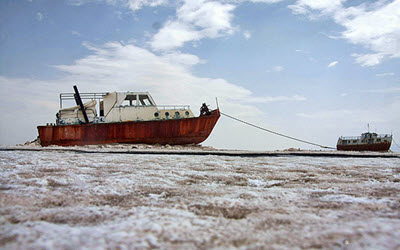 NCRI – Drought crisis has hit Iran’s most historic lake so hard that many environmentalists from different European and Asian countries who at the invitation of Rouhani’s government visited Tehran to find a possible solution, have no more any hope of getting out of it as unconventional and non-standard policies along with negligence and inaction of the officials over years have most hit a possible revival process of Lake Urmia.

Along with the rejection of the Iranian regime by the international community in this regard, the state website ‘T News’ points in an article on Sunday October 16, to the dangerous aspects of salt storm in Lake Urmia region and adds: “with Lake Urmia being dried out, dust and salt storms will make their way from northwestern parts of the country towards the central parts at which time even Tehran, Ghazvin or Arak will not be safe from the dust, which is expected to put the health of 14 million people in danger.”

The reality about the environmental crisis in Iran under the rule of vilayat-e-faqih is that the Mullahs’ regime has intentionally ignored the serious consequences the crisis has on people’s health, by refusing to give any kind of information or awareness in this regard. Because according to the studies of environmental scientists, any kind of dust especially salt-laden types, will always give rise to very dangerous diseases among the inhabitants in the region, among which are diseases like sinus infections, lung cancer, cardiovascular diseases, eye diseases, Asthma, ear, nose and throat infections and neurological diseases .

The report continues by pointing to one of regime’s sample studies in the region and adds: “an experiment was carried out in 2014 to observe the effect of dust storms on school children’s health in which 88 students from East Azerbaijan province were studied.”

The results of the study shows that the drying of Lake Urmia even at its current level has endangered people’s health. 21 percent of the students in the study said that they had experienced wheezing, 14 percent had wheezing in past years, 30 percent had dry coughs, 13 percent made whistling sounds while breathing, 8 percent had whistling sounds in past years, and 10 percent reported sleeping disorders due to irritation of their respiratory system. In the meantime, 9 percent of the students suffered from respiratory tract congestion as well as restricted breathing.”

If we consider this extremely manipulated statistics by the Mullhs’ regime as a criterion for the deterioration of situation for the inhabitants of Lake Urmia region, then we will notice by rule of thumb that according to this study, 97 percent of children in the region have been plagued with irreversible respiratory and lung diseases, something which has definitely rung alarm bells for many families, specially for 14 million inhabitants of the region.

Previous article
Trial of the Revealer of audio tape concerning the 1988 Massacre in Iran
Next article
Working children earn 8-9 Dollars a day. Collecting 1370 street children in the past six months