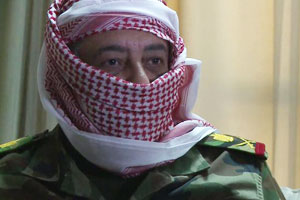 Muzhir al-Qaisi:Today the revolutionaries from the Iraq tribes have flared up the flame of a revolution that will never be extinguished. This revolution started when our people demanded their legal rights and based on the constitution they resorted to sit-ins. However, They were responded with fire and iron. As a result, weapon was chosen as the last shelter for implementing our demand. But thanks God and thanks to our social grassroots that are growing day by day, we managed to take control over Mosul, Salahaddin, Fallujah, Garma, Biji and most of northern areas, and we are now near Baghdad’s walls and its surroundings, meaning Baghdad’s belt.

Q: What draw you to this point? I mean from the self-defense stage to the stage of controlling over areas in north of Iraq.

Muzhir al-Qaisi: It was Maliki who draw us to this stage. It was Maliki who forced us to do so. When he dispatched his military units to our areas and set up checkpoints, the goal was to create horror among the people.

Muzhir al-Qaisi: In fact ISIL exists and nobody can deny them … but this revolution, is not that organization’s revolution, rather it is the revolution of tribes who have risen up against tyranny, and Military Councils are part of those risen forces.

Q: To what extent the tribes are in contact with ISIL? Is there a direct relationship and is there coordination?

Mozhar al-Qaisi: There is no coordination or relationship. As I said, this organization exists and it has some combatants and has some places where it has movements, but this revolution is a tribal revolution and this is something that we want to let the whole world know. This revolution is a new Iraqi spring. This is an armed revolution to end tyranny and has no relations with any other plan or program; it has no relations with terrorism or any other party. This is a revolution of genuine Iraq’s tribes who have risen up against a tyrannical government.

Q: What is your evaluation of the number and strength of ISIL organization?

Muzhir al-Qaisi: We are not in contact with them to know their number. This number and this magnification of the number of combatants has not been mentioned by any official news agency or by any official side or military side. But what I wanted to say is no matter how big the number of any armed force may be, is it comparable to the tribes’ population? That is the whole people of Iraq. It is not comparable at all. The tribes are the people of this country and the inhabitants of these same cities that have been freed. They have taken arms to defend their cities and beliefs. The size of other organizations that claim are with the revolutionaries or the revolution, no matter how big it is and how many organizations, their size cannot be as big as the size of masses’ revolution.

Q: Do you treat ISIL based on the rule of the enemy of your enemy is your friend?

Mozhar al-Qaisi: Never. We are bound to the nation’s goals. Our weapons have been given to us by our people. There might be numerous guns pointed at the main target, but it doesn’t mean that there might be coordination and cooperation among them.

Muzhir al-Qaisi: Not necessarily, it has no effect. We plan ourselves and we act ourselves…

Q: But now the western community, UN Secretary General Ban Ki-moon, Maliki’s government and many parties generalize what is going on in areas under your control and what is being done by the ISIL elements. Does this matter affect what you are trying for and your just rights in the absence of a certain stance on your behalf?

Muzhir al-Qaisi: It sure affects; but we have to think more clearly. There are surely individual treatments these days from this or that which are in contrast with our principles and treatment and even with human rights. But who is spreading such things and attributing them to us. This is a big question. These currents do possess extensive media and propaganda facilities. Let me tell you an example. If you visit U-Tube now, you will find very many clippings footage with specific scenes in them.

Q: Like trampling human rights and shooting in the head and ….

Muzhir al-Qaisi: In order to damage our project. Well do you know that when we post a statement on YouTube, they do not let it be there for more than 48 hours and delete it? Even our publications are deleted on YouTube and are removed… So why these footages remain only this much? Isn’t there anybody to defend them to remain?

Q: What is your position regarding the violations that exist in YouTube right now? What is the position of tribal revolutionaries in this regard?

Muzhir al-Qaisi: We do not agree with any action that is against human rights, from any side. We condemn these actions and reject them. We do not agree with such actions. We don’t agree with trampling rights whatsoever. Others have their own opinion, but we don’t absolutely approve it and do not use it even against our enemies either.

Q: Is it possible for us to witness conflict between the tribes’ revolutionaries and the ISIL like what happened in Syria?
Mozhar al-Qaisi: personally, I hope we do not have to do it.

Q: What solutions do you think may be exist?

Muzhir al-Qaisi: War tactics and philosophies in armed struggles always ended to political solutions. It is not possible that revolutionary movements last without weapon unless; all political goals that they fight for them are achieved. We want to gain this goal with fewer casualties; we were forced to take weapon. We are not alone; we are backed by a people that obliged us to take weapon.

Q: Is Baghdad among your goals? What is your plan?

Muzhir al-Qaisi: we have planned for regime change and its overthrow, if overthrowing the regime requires overthrowing its army and militants that have entrenched in Baghdad, and when it is appropriate, this goal would be in our planning and our priorities. Today, we try to eliminate the tyranny imposed on Iraqis. I would like to repeat that we are not warmongers. We do not try for fighting; we do not want more casualties, either in governmental army consisting of militants or those civilians that are trapped in fire line. So, I am saying that we have planned for everything; the initiative is at our hand. We determine the timeline and extend of the assault.

Q: Saudi Arabia has issued a statement about Iraq’s development, how do you look at Gulf States’ position toward Iraq’s crisis?
Muzhir al-Qaisi: We welcome this position; however, it is late and too late. We have been marginalized for a long time. I am saying that on TV, we are not representative of one sector of the society. We are the representative of all Iraqi people; all Iraqis are important for us. Maybe, one sector of the society has endured more tyranny than the other sectors, because it has been targeted in a larger project, a project that comes from Iran. Iran intends to change the demographic composition and also demographic map in the region to approach Mediterranean. We do not ask these countries for help, except their approval and paying attention to our demands.
We seek a democratic Iraq that all people enjoy democracy with an elected government ruling people; where people live in justice, live with each other and protect Iraq’s unity. We do not accept any disintegration, neither geographic nor social.

Previous article
Al-Maliki is the problem
Next article
Iran: IRGC forces dispatched to Iraq by Khamenei have been killed and injured