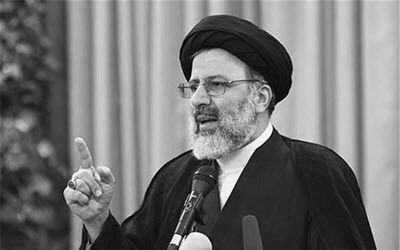 Ebrahim Raisi, the new candidate in upcoming sham election in Iran
The candidacy of a cleric well known for his role in the atrocious crimes by the regime ruling Iran over the past three decades was announced. Ebrahim Raisi, currently head of the massive Astan Quds Razavi entity in control of a sacred Shiite Muslim shrine, will be running for president in the May 19 polls. Heshmat Alavi wrote in the ‘American Thinker’ on April 7, 2017.

“While there are claims that this new development will unify the faction opposing the incumbent, President Hassan Rouhani, it is important to shed some light on Raisi’s past to understand how, very similarly to Rouhani himself, this new candidate has played a major role in the mullahs’ crimes. One can also conclude that this is a prerequisite for any candidate taking part in any so-called election – read: selection – held by the regime in Iran, thus rendering no change at all.”

Raisi’s announcement on Thursday, as reported by the semi-official Tasnim news agency, comes a day after two other members of the “hardliners” faction, former firebrand president Mahmoud Ahmadinejad and Tehran mayor Mohammad Baqer Qalibaf, opted out.

Analysts are voicing a variety of opinions over the fact that Raisi will tighten the race and make the stretch more difficult for Rouhani, and portraying a broader image of Iranian supreme leader Ali Khamenei, ill with prostate cancer, who is grooming Raisi to succeed him, using the presidency as a springboard.

Born in 1960, Raisi was involved in the regime’s judiciary since early after Iran’s 1979 revolution. In 1988, as Tehran’s deputy prosecutor, Raisi was a member of the four-man team known as the “Death Commission,” appointed by Iranian regime founder Ruhollah Khomeini, to massacre all political prisoners in Iran’s prisons who maintained their opposition. Over 30,000 political prisoners, mostly members and supporters of the People’s Mojahedin Organization of Iran (PMOI/MEK), were sent to the gallows in a span of mere months.

Last summer, a sound file surfaced, dating back to 1988 and around 20 days after the massacre began, of Khomeini’s successor, Hossein Ali Montazeri, meeting with Death Commission members, including Raisi, and describing the massacre as the most horrifying crime carried out by the Iranian regime. Subsequent reports showed how Raisi played an active role and was known as the most ruthless Death Commission member.
Khamenei promoted Raisi in 1989 to deputy chair of the Assembly of Experts, the body in charge of selecting the next supreme leader. Raisi continued to climb up the regime’s ranks in the judiciary, continuing his crimes against the Iranian people.

Khamenei also trusted Raisi to lead the Astan Quds Razavi, a foundation reported to be “one of the most important political and financial conglomerates of the clerical regime controlling massive assets and capital.”

However, as mentioned before, this presidential election in Iran is not between two starkly different candidates. Rouhani has also played his role in the regime’s atrocities, proving despite his claims of being a “reformist” that all of the Iranian regime’s establishment enjoy reports full of repressive measures and crimes against the Iranian people.

Rouhani has since the 1979 revolution enjoyed a close relationship with the ultraconservative and ruthless Khomeini; acted as former Iranian president Ali Akbar Hashemi Rafsanjani’s right-hand man as he commanded Iran’s forces during the Iran-Iraq War of the 1980s, sending millions of innocent Iranians, including juveniles, into the battlefields; was actively involved in the crackdown of the 1999 student uprising as secretariat of the Supreme National Security Council; and presided over 3,000 executions under his tenure during the past four years.