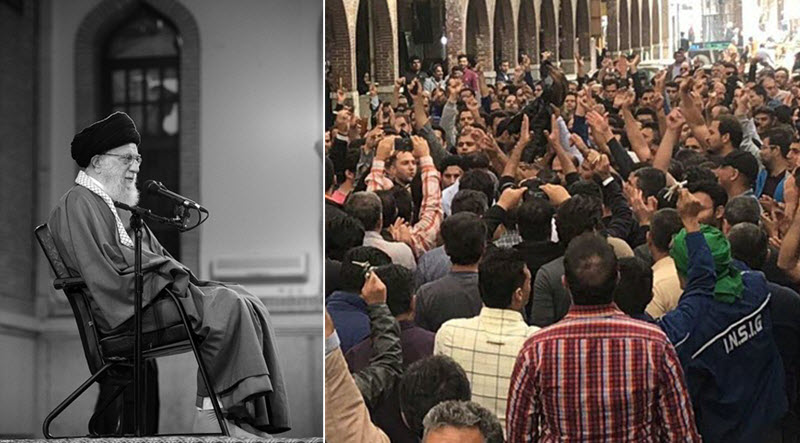 Much of Iranian Supreme Leader Ali Khamenei’s comments before senior regime figures in a December 12 meeting were focused on the very real possibility that in 2019 the people and their organised resistance, namely the People’s Mojahedin Organization of Iran (PMOI/MEK), would overthrow the mullahs.

Khamenei is so scared of this that he has placed the Regime and its state security forces on high alert, something designed to unify the warring factions of the Regime against a common enemy: The Iranian people.

These warnings spread across Iran during Friday prayers, with imams in various cities across Iran warning about the “enemy” and plots to overthrow the Regime next year.

The Friday prayer imam of Asalem, northern Iran, said: “We must be very aware in 2019 because these threats in 2018 may be paving the paths for a much more powerful sedition next year… Experience shows that following the death of [regime founder Ruhollah Khomeini], the system has experienced a sedition once every ten years. Now we must be prepared for 2019.”

That is true, the Iranian Regime has seen mass uprisings every ten years since Khomeini’s death in 1988, from the 1999 student uprising to the 2009 Green Revolution, and given the mass uprising that began at the start of 2018, it seems obvious that the mullahs do have something to fear.

Gholam-Hossein Sedighi, the Friday prayer leader for Tehran said that the enemy wanted to “overthrow the state from day one [of the mullahs’ rule]”, while Ali Moalemi in Qaemshahr, northern Iran, claimed that the enemy is trying to “spread corruption” in Iran. To be clear, the Resistance has always wanted to remove the mullahs from power, but the corrupt individuals in Iran are the ones in the Regime.

While the Friday prayer leader for Kermanshah said: “The leader insisted to be aware of 2019 and the years afterwards. The enemies are hell-bent on carrying out conspiracies against the Islamic Republic in 2019. For years, operatives of the global arrogance have carried out plots against the Islamic Republic of Iran for years, seeking to bring an end to this Islamic state.”

And yes, it’s very likely that the Resistance have plans to bring the Regime down in 2019. They haven’t exactly been hiding that they want the mullahs gone.