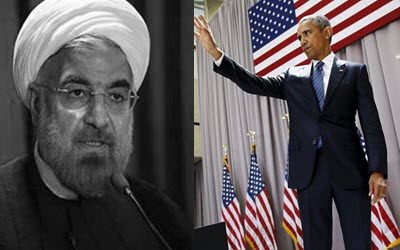 There are signs of the Iranian regime establishment being caught off guard after trekking into uncharted Trump waters. (AP)

Iranian Supreme Leader Ali Khamenei, known to lead a regime based on a mantra of “Death to America,” has been cautiously silent ever since US President Donald Trump took the helm in the White House.

With a recent medium-range ballistic missile test launch backfiring severely, both politically and substantiallyhttps://english.alarabiya.net/en/perspective/features/2017/02/07/ANALYSIS-Iran-feeling-new-US-policy-shift-after-Obama.html–the vessel exploded during reentry into Earth’s orbit–the regime leader, who has the final word on all national security and foreign affairs, is maintaining a low profile. Heshmat Alavi wrote in ‘AL Arabiya English’ Tuesday, 7 February 2017. The article continues as follows:

The new White House lashed back with a series of measures Tehran has not been used to, especially after enjoying eight years of the Obama administration’s highly flawed appeasement policy.

Tensions escalated last week following Iran’s missile test confirmation, triggering US National Security Advisor Michael Flynn using his first public appearance to lash back a staunch warning, placing Tehran “on notice.” Trump has been very active, to say the least, taking to Twitter and warning Iran about the high contrast between he and his predecessor. “Iran is playing with fire – they don’t appreciate how “kind” President Obama was to them. Not me!

Iran is playing with fire – they don’t appreciate how “kind” President Obama was to them. Not me!

And his administration wasted no time before the weekend by slapping a new slate of economic sanctions targeting 25 Iranian individuals and entities involved in Iran’s missile program, while suggesting the possibility of more to come. “President Donald Trump’s press secretary suggested Friday afternoon that more sanctions, and even military action, could be on the way,” reports indicate.

And to add insult to injury, US Defense Secretary James Mattis, in his first foreign visit, labelled Iran as the world’s “biggest state sponsor of terrorism.”

Despite Fridays traditionally providing a platform for senior Iranian officials to voice positions over foreign affairs and pump back the spirit lost among their dwindling social base, Khamenei remained silent. And this is a time where his Revolutionary Guards and paramilitary Basijis are in most need of his so-called guidance.

These are all signs of the Iranian regime establishment being caught off guard after trekking into uncharted Trump waters. With its ballistic missile Tehran was actually testing the new Trump administration. The mullahs are now highly regretting such a poorly calculated measure.

Interesting is the fact that the pro-appeasement camp is continuing their old tactics of warning how Iran may do this and that. “…terrorist attacks against Americans, attacks by Shiite militias against the thousands of American troops in Iraq, or pressure on the Iraqi government to deny the United States access to the bases where it trains Iraqi security forces,” wrote Philip Gordon in The New York Times. Gordon was Obama’s White House coordinator for the Middle East, North Africa and the Gulf region from 2013 to 2015.

After leaving the entire region in mayhem by handing Iraq over to Iran in a silver plate and cowardly failing to take any meaningful measure against Syrian dictator Bashar Assad after declaring a so-called chemical attack “red line”, any individual in any way even merely affiliated to the Obama Doctrine is not in any position to make any comment about how the new White House should blueprint its Middle East policy.

Iran understands very well that the Obama “golden era”, as one figure close to former Iranian president Ali Akbar Hashemi Rafsanjani put it, is over. And the recent saga, from Tehran’s January 29th missile test to the sanctions imposed by the Trump White House on February 3rd, forecasts stormy weather conditions for the mullahs.

As the Trump administration weighs various measures vis-à-vis Iran, there are a few issues worth keeping in mind. The past 16 years have proven that foreign military intervention and an appeasement/engagement/rapprochement approach have failed miserably. And yet, there is a third option for the US to consider: standing alongside the Iranian people in their struggle to establish freedom and democracy in their country.

Considering its significant role in domestic crackdown, foreign military intervention and most significantly the involvement in Syria, and Iran’s nuclear program and ballistic missile drive, the first and very effective step forward in this roadmap is to blacklist Iran’s Revolutionary Guards (IRGC) as a Foreign Terrorist Organization.

To this end, all deals and trade with IRGC-affiliated companies will be banned, as proposed by Iranian opposition leader Maryam Rajavi, President of the National Council of Resistance of Iran (NCRI).

Welcoming the new US sanctions on Iran, the NCRI is an alliance of dissident organs, including the People’s Mojahedin Organization of Iran (PMOI/MEK), best known for first blowing the whistle on Tehran’s clandestine nuclear weapons program.

Disclaimer: Views expressed by writers in this section are their own and do not reflect Al Arabiya English’s point-of-view.

Heshmat Alavi is a political and rights activist. His writing focuses on Iran, ranging from human rights violations, social crackdown, the regime’s support for terrorism and meddling in foreign countries, and the controversial nuclear program. He tweets at @HeshmatAlavi & blogs at IranCommentary.