Iran Regime’s Newspaper: Dear Mr. President We Dare Not Quote Some of Your Words 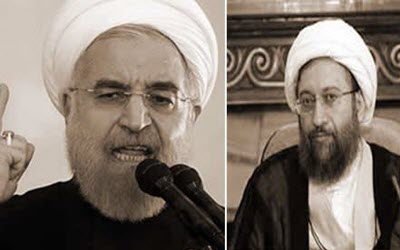 NCRI – Expressing concerns over the growing tension and fight between the executive and the judiciary and its social consequences, the state newspaper Ebtekar writes on Wednesday January 4 that “although giving advice is not going to work in this case as they definitely are more aware than a writer or a journalist of the consequences of their remarks in country’s political environment, but (we intend to) warn over the elite coarse talking to one another which, in addition to escalating verbal violence in society and affecting the overall social life, is going to shake our body and soul working in the press as well.”

“Making repeated accusations by country’s top officials sends the message to their supporters to fight each other with even a harsher language, and considering the presidential and municipal elections are less than five months away, it’s quite clear that in such an environment any political victory or defeat would be regarded as a victory or defeat on the battlefield”, adds the newspaper.

The newspaper then reflects the height of the tension between Rouhani and Larijani, saying “Dear Mr. President and head of judiciary, we dare not quote some of your words, and even the official media and news agencies censor parts of your remarks.”

The newspaper has eventually asked them to avoid saying something which could get the regime into trouble: “so, please have our back and don’t speak in such a way so we get into trouble.”

Previous articleIran: Protest Gathering of Workers
Next articleRussia Pledges to Expel Militias From Syria and Slam Stubborn Heads Into the Ground