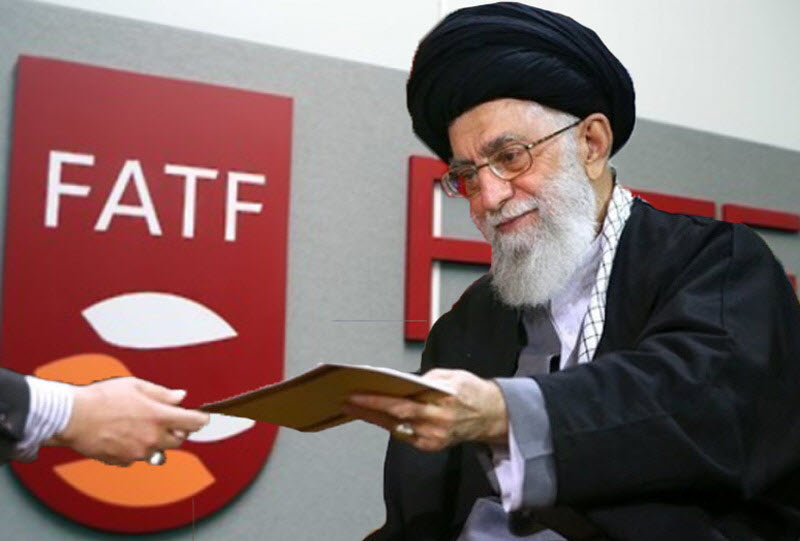 One year after the U.S. abandoned the JCPOA, and months of hoping that the European package would rescue Iran’s crumbling economy, the regime’s foreign minister, Mohammad Javad Zarif shows his disappointment with his post on Twitter, “A year after US’ unlawful abrogation of JCPOA, Europe can’t muster political will to defy US’ #EconomicTERRORISM. Not even by setting up a single banking channel for humanitarian aid.”

Following the 2015 nuclear deal, UN Security Council Resolution 2231 was adopted. It calls on Iran “not to undertake any activity related to ballistic missiles designed to be capable of delivering nuclear weapons.”

An interesting perspective is presented by IRNA news agency. “The uncertain, and in a way hopeless situation, of approving the FATF bills [in Iran] continues while directors and analysts of the banking sector have already warned time and again about the consequences of not approving the aforementioned bills for the banking network [of Iran],” a recent piece reads.

Seyed Kamal Seyed-Ali, a former deputy governor of the Central Bank of Iran, told IRNA, “If we don’t join this international agreement [FATF], every bank can avoid working with us with this excuse.”

Seyed Reza Haji Aghamiri, a member of Tehran Chamber of Commerce, Industries, Mines, and Agriculture, also voiced concerns. “In the new year, there is the FATF issue that, if not approved, the current international spread of negativity about us will increase,” he said. “Under the pretext of [ballistic] missiles and support for terrorism, the U.S. and our enemies seek to paralyze our economy and we should be vigilant about this and shouldn’t give them excuses. Generally, the new year will be a tough one for Iran’s economy.”

Mehdi Pazouki, a former Iranian official and a current professor of economics at the Tabataba’i university in Iran, said, “I believe that the Expediency Council must be responsible about such decisions and pay its price. As we consider the government responsible for escalating inflation, if problems arise in Iran’s trade with other countries in case the FATF is not approved, the responsibility will be on the Expediency Council’s shoulders. Approving the FATF is not tantamount to economic problems being resolved. Current problems are rooted in our management and views, but we should pay attention that with economic ignorance, one can’t remove these problems.”

The Mashregh News website recently attacked an Iranian MP who had said, “The FATF is U.S.’ bullying, but we need to accept it.” Mashregh News countered with, “The reformists claim that in order to rescue the JCPOA we need to join the FATF. While prior that, according to proponents of the nuclear deal, the JCPOA was supposed to solve all the country’s problems.” It adds, “They say, sign the JCPOA to rescue the economy; accept Europe’s financial channel so that the JCPOA is rescued; accept the FATF to rescue the European financial channel, accept the ballistic missile [limitations] and regional [restrictions] to so that FATF is rescued, accept the human rights [demands] to rescue the ballistic missile and regional [deal].”

Real reforms that adhere to financial transparency are at odds with the Islamic Republic’s philosophy, as previously pointed out, and will have fundamental effects on its behavior and power structure, which may ultimately result in its demise. The current controversy and indecisiveness about FATF, is just one more problem for a regime that is ideologically rooted in the past.