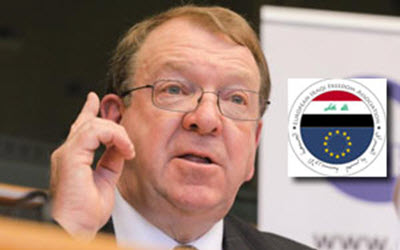 NCRI – In an exclusive interview with al-jazirah.com on December 19, Struan Stevenson, president of the European Iraqi Freedom Organization, answered questions on Iran’s nuclear deal, the future of Iraq and its policies which is currently being controlled by the Iranian regime, and the European Parliament’s views on these issues. The following is the full text of this interview.

Question: How does the European Union view the current Iraqi government? Do you agree with the Iranian regime’s policies?

Struan Stevenson: we at the European Union want a pluralist state in Iraq to represent all different ethnicities, religions and races in the country. Unfortunately, the course of developments In Iraq due to a continued intervention by Iran (Iranian regime) followed by the West’s policy of compromise and inaction, has left nothing of an independent sovereignty for Iraq.

Regarding the Iranian regime’s policies, I should point out that this is a medieval regime that ever since Khomeini took power in 1979, has only been able to continue its reign over the civilized people of Iran by using its two leverages of domestic repression and creating crises and intervention in the region. To maintain its power, the Iranian regime suppresses the Iranian people, and to control the consequences of the suppression, the regime tries to export crisis and terrorism and intervene in the region. That’s why the Iranian regime’s footprints are clearly visible in all the crises in the Middle East, from Iraq, Syria and Yemen to Lebanon, Bahrain and other countries. I believe that to put an end to all the crises in the Middle East, including Syria, Yemen, Iraq, ISIS, etc., there’s only one real solution and that’s the overthrow of the Iranian regime.
Question: after the militias backed by the Iranian regime entered Iraq, how much freedom is there in Iraq?

Struan Stevenson: the Iranian regime’s logic in dealing with different issues is the logic of force and coercion, meaning that everywhere, whether in Iran or other countries including Iraq, the Iranian regime works its way forward only by using force, providing weapons and exporting murder, genocide and looting. Likewise, the militias trained by the regime have basically been deployed to kill. And this is the Islamic Fundamentalism with the Iranian regime as its harbinger. So, it’s quite natural that where the religious militias play the key roles in government, there’s no such thing as real freedom and what you see today in Iraq further proves the point.

Struan Stevenson: Iran’s nuclear program has only been designed to serve the hegemony of the Mullahs in the region. So, no conscientious person in any corner of the world has been or is willing to support such a project. This project is at any stage a threat to world security and therefore it’s necessary for it and all its infrastructures to be completely dismantled so as to have a secure world. Due to Iranian Resistance’s revelations and an international pressure, the Iranian regime has been forced to step back from making a nuclear bomb, a move which has weakened the Mullahs. The West, however, made unjustified concessions to the regime during the negotiations. On the other hand, the regime had imagined that signing the nuclear deal will open the doors to the world, which didn’t happen and turned into yet another failure for the regime. Besides, the new US government doesn’t accept this very nuclear deal, with the extension of Iran Sanctions Act for another ten years by US Congress and Senate being the first step in this direction. That’s why some regime officials have by order of Khamenei started making empty threats, none of which are serious anyway.

Question: how do you see the Iranian Resistance’s efforts and its role in the future?