Iran: The Far-Fetched Salary for the Regime’s ‘Chief Justice’ 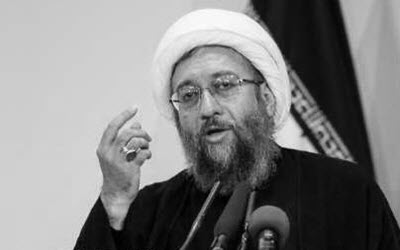 NCRI – On Wednesday 24th 2016, as the head of the Iranian Judiciary in his speech denied the corruption in the Judiciary, a member of parliament called for an investigation into this matter.

On Sunday 23rd October 2016, the media of the Mullahs’ regime reported that 63 bank account have been identified that are held in the name of the head of the Judiciary. The media also announced that the balance of those accounts reaches to 312 million dollars and its monthly interest is more than 7 million dollars per month.

The other news shows that the annual input of these accounts is equal to 78 million dollars. Regarding this issue, 3 employees of the Judiciary and 2 employees of Melli Bank have been arrested.

As the news spread about the corruption of the Iranian authorities, the Minister of Economic Affairs and Finance, Ali Tayebnia did an interview with IRIB TV2 on 8th November 2016 and he confirmed the 63 existing bank accounts which are held in the name of Sadegh Larijani. He also claimed that the accounts are legal and legitimate.

The interview revealed the plunders made by the head of the Judiciary; however, the Minister of the Economic Affairs was slammed by the regime’s media for disclosing such issue.

Some news reported that Ali Tayebnia has done this interview to clear the air, as Sadegh Larijani requested.

On Monday 14th November 2016, the issue was brought up to the parliament and a member of parliament demanded a report on the bank accounts held by the head of the Judiciary and he questioned the legality of these accounts.

Mahmoud Sadeghi said:”which law does allow the public funds to be deposited in the personal accounts? Which Sharia law does allow the judiciary to hoard and deposit these funds and to receive their interests? (Maaref Radio, 24th November 2016)

Following the incident, the daughter of Rafsanjani in an interview said: “they say that these accounts also existed in time of the former heads of the Judiciary including Yazdi and Shahroudi and they have discussed this issue with the Supreme Leader. In this regard, this clarification does not justify the violation of law. There is an infringement to have a personal account and to deposit the government money in it. Even a signature on these documents is an infringement even though no mistake has been committed.”

The press also reported that Hassan Rouhani has brought up the issue with Khamenei regarding the bank accounts and he has sued the head of the Judiciary for that.