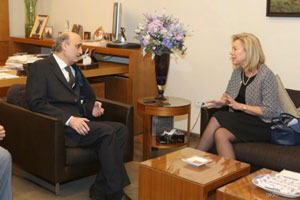 Lebanese Forces leader Samir Geagea has told the U.N. Special Coordinator for Lebanon that Iran is the only country blocking the presidential election in his country.

He has urged Mrs. Sigrid Kaag to skip Saudi Arabia and head directly to Tehran since Iran is the only country blocking the presidential, An Nahar newspaper reported on Thursday.

U.N. Special Coordinator for Lebanon Sigrid Kaag is set to head to Saudi Arabia and Iran with the aim of resolving the presidential stalemate, according to the report.

Lebanese Forces leader also said in an interview published on Sunday that Hezbollah, the Iranian regime’s proxy in Lebanon, is preventing the establishment of a Lebanese state.

“What is disrupting the formation of a state in Lebanon is the presence of Hezbollah as a state within a state.”

Hezbollah’s arms and the “method of its presence” contradict with the notion of a legitimate state, he said.

“Either a president fully supportive of [Iran] was [elected] or no elections would be held, and this is what happened,” he said.

The Lebanese Forces chief also noted Iran’s expansion in the region, saying that it had adopted the rhetoric of the Palestinian cause as a means to achieve domination in the Middle East.

“The region cannot accommodate this [Iranian regime’s expansion] because it will lead to unpredictable repercussions.”