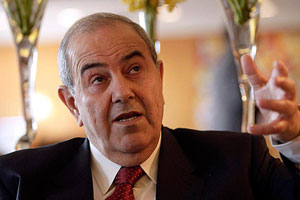 Iraq’s Vice President Iyad Allawi has told Sky News that Iran’s involvement in his country is unacceptable and is failing to push Islamic State fighters back.

Mr Allawi said he was very concerned about the Iranian regime’s increasing influence on the Iranian-backed groups fighting the war against IS in Iraq.

He said: “I think the role of any regional power or any power in Iraq’s affairs in unacceptable.”

“Doing what they are doing and sending officers to fight and to lead, and declaring that Baghdad is becoming the capital of the Persian empire, is unacceptable”, he said.

Ali Younessi, Special Assistant to Hassan Rouhani, and former Minister of Intelligence and Security, said on March 8: “At present, not only Iraq is under the influence of our civilization, but it is our identity, culture, center and capital. This is the case today and has been the case in the past because the geography of Iran and Iraq is inseparable and our culture is inseparable. Thus, we either have to fight each other or become one.”

The Iranian Plateau that the regime is claiming includes Iran and many countries in the region, particularly those in central Asia and Caucasus region.

The religious dictatorship of mullahs in Iran that faces lethal internal and external crises and is entrapped in a deep impasse in the nuclear negotiations where the consequences of retreating from production of the nuclear bomb or insisting on it are equally tremendously dangerous for the regime in its entirety, has found its escape solely in spreading its intervention and warmongering in the countries in the region.

Cultivating on the appeasement policy of the United States and Western countries, regime’s leaders from various factions are intensifying their intervention in the countries in the region.

To flex their muscles and cloak their weaknesses and internal crises, they are now acknowledging their export of terrorism and fundamentalism and their aggression against countries in the region.