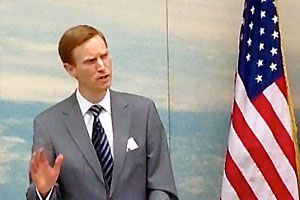 The Iranian regime is the biggest threat to peace and security in the Middle East and the US lacks any real strategy to counter it, American conflict expert has says.

Upheaval in neighbouring Iraq is largely due to interference from the Ayatollah’s extremist regime, Ivan Sacha Sheehan wrote in The Hill.

Mr Sheehan said: “Tehran’s systematic, deceptive and unrelenting pursuit of nuclear weapons has heightened regional tensions; their failure to protect minority voices has led to human rights abuses; and their retaliation against anyone that fails to subscribe to their export of terrorism, instability, and religious fundamentalism has become an ideological commitment that fuels regional frustration.

“The regime’s continued interference in the sovereign affairs of Iraq’s fledgling democracy now poses a challenge to U.S. interests.”

It also remained unclear whether the appointment of new Iraqi Prime Minister-designate Haider al-Abadi represented mere cosmetic change or an actual break with Tehran, he wrote.

He added: “But what is absolutely certain is that Nouri al-Maliki’s departure will be a positive development for Iraq and an opportunity for the creation of a more inclusive, representative government in Baghdad.

“But establishing the new Iraqi government will be challenging.”

During his tenure as prime minister, Maliki was a puppet of Iran and stoked sectarian conflict and tension that triggered the current unrest now rife in Iraq, he wrote.

He wrote: “The new prime minister will inherit these tensions as well as very deep concerns by many in Iraq that their affairs are actually governed from Tehran and that Iranian mullahs will scuttle any hope of actual democracy flourishing.

“The ongoing social unrest in Iraq arises from a deep concern that Sunnis, Kurds, and the plurality of voices that make up the country will have no voice in its future.

“Were it not for Maliki there would be no momentum to fuel the insurgent anger and resentment channelled by ISIS. In fact, ISIS appears much stronger than it actually is because it enjoys the support of disenfranchised Sunnis that make up about 20 per cent of Iraq.

“This marriage of convenience is hardly a declaration of common cause but rather an act of defiance against Iranian interference and a show of displeasure with Maliki’s rule.

“The new Iraqi prime minister will need to go out of his way to demonstrate that he is not acting on Iran’s behest, that he is not Maliki 2.0, and that he does value religious and political pluralism.”

The new prime minister should immediately show that he is ‘his own man’ by working with US officials to resettle Iranian dissidents at a Camp Liberty, and who now represent the best hope of regime change in Tehran, he said.

He added: “The opposition group’s commitment to building a nuclear-free, democratic, gender-equal, secular state that is at peace with her neighbors has led to their repeated mistreatment by Maliki’s forces acting as Tehran’s proxies.

“The failure to protect the 3,000 political refugees at Camp Liberty is the real impending humanitarian catastrophe in Iraq.

“The real challenge in Iraq is the creation of a government that is inclusive enough to represent all of Iraq’s voices and promote grass roots reconciliation. This will only be achieved when Tehran no longer has a seat at the political table in Iraq.

“The new prime minister can cut the legs out from under ISIS and address the resentment many Iraqis feel by ending Maliki’s policy of doing Iran’s bidding.

“Solving the Iraq puzzle requires that US officials double down on the real threat in the Middle East and increase the prospect of collapse in Tehran.”

Mr Sheehan is director of the graduate programs in Negotiation and Conflict Management and Global Affairs and Human Security in the School of Public and International Affairs at the University of Baltimore.