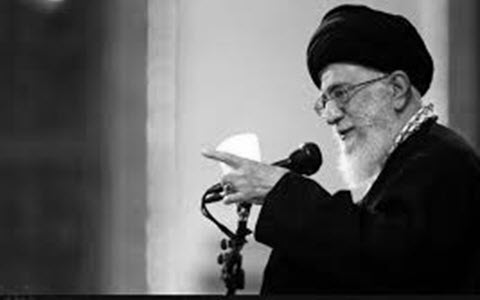 NCRI – With US Treasury sanctioning 11 more Iranian regime’s affiliated entities and figures at the same time when sanctions relief was extended by the US President, contradictory stances are taken by regime officials and media, suggesting how confused and pinned they are in the vortex of a nuclear deal.

In its September 15 news report, regime’s TV quoted regime’s ambassador to the UN ‘Gholamali Khosroo’ as saying “these days, whenever it’s time to extend (Iranian regime) sanctions relief, unfortunately Americans come up with unsubstantial claims to add new entries to their list of sanctioned entities, only to show the congress and people that they’re sticking to their harsh, radical positions. Besides, the new sanctions are, as the Americans themselves say, non-nuclear ones.”

“We believe that any kind of sanction is against the principles of diplomacy and dialogue”, he added.

Also in this regard, regime’s TV reported on September 16 that “the nuclear deal joint commission will probably be held in a few days in New York on the sidelines of the UNGA. However, it’s still not clear at what level the commission will be held.”

It’s been some time that Rouhani’s flunkies and media have been looking forward to a possible Zarif-Tillerson meeting, but apparently cold water has been thrown on regime’s hope for such a meeting, so much so that regime’s Foreign Ministry Spokesman ‘Ghasemi’ came on the scene to say “no meeting with Tillerson is included in Zarif’s schedule.”

Meanwhile, Secretary of regime’s Expediency Council ‘Mohsen Rezayee’ has been quoted by state media as saying “there are some who are waiting day in and day out for the United States to open its doors, while it’s become obvious for 40 years now that the US sky is not going to rain on us.” (State-run ISNA news agency, September 15, 2017)

Also in this regard, Seyed-Abdollah Motevallian, referred to as political researcher, has written in a Revolutionary Guards’ paper “our statesmen have been stripped of the courage to take a revolutionary action. Unfortunately, our diplomacy is afraid of the nuclear deal and is bound to preserve it, while it shouldn’t. Our diplomacy should not put all its efforts into keeping the corpse of a failed nuclear deal upright.” (Revolutionary Guards’ Javan newspaper, September 16, 2017)

Motevallian’s remarks come at a time when Ali Khoram, one of Zarif’s advisors, has written an article titled “why Trump is not able to infringe the nuclear deal?” in government’s official ‘Iran’ newspaper, saying “first because the nuclear deal is a multilateral, international agreement. Second, the deal has currently only one solid foundation that if weakened, the deal will collapse. That foundation is the Islamic Republic, and as long as it stays committed to the nuclear deal, it won’t collapse even if the United States intends to make it happen.”

Meanwhile, Revolutionary Guards’ Javan newspaper has in its September 16 issue warned regime’s rival bands, saying “the rift at such a level between viewpoints of government officials has emerged at a time when it’s expected that to preserve national interests, domestic security in particular, a common understanding of the nuclear deal’s threats, challenges, and holes needs to be reached, with its outcome being a unified, coherent stance.

“The zigzag stances taken by Foreign Minister, head of Atomic Energy Organization, Foreign Ministry Spokesman, and other officials could lead to undesirable consequences, the most important of which could be giving a specific direction to Americans’ anti Islamic Republic policies and shaping their beliefs, something that could eventually lead to the United States declaring our non-commitment to the nuclear deal as well as the Resolution 2231.

“In other words, the contradictory stances taken by government officials will lead the Americans to the conclusion that their two measures, namely introducing Iran as the violator of the nuclear deal, and accessing our sensitive military sites, will not be faced with serious, coherent opposition or reaction from the country’s senior officials. And such an impression could lead to an expansion of international sanctions and restrictions against us.”

Previous articleIran Regime’s Downfall, Main Topic of Discussion at the Experts’ Assembly Meeting
Next articleMrs. Maryam Rajavi Welcomes the First Testimony by a US President Underscoring the Need for Change in Iran