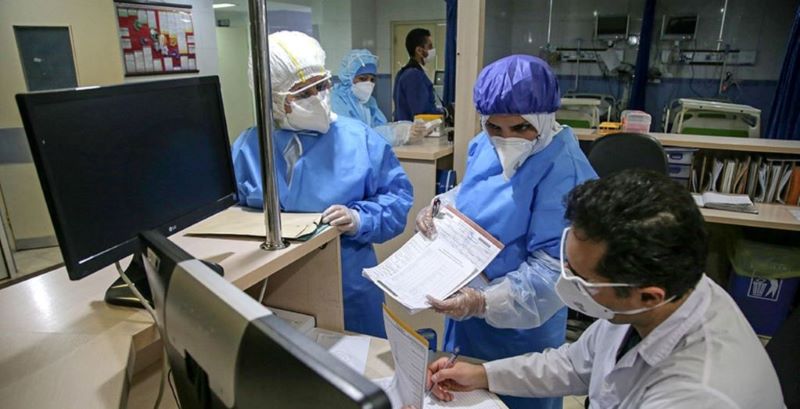 In Iran, the coronavirus started in Qom but due to the mullahs’ negligence and the regime’s cover-up to ensure higher participation in the February 21 legislative elections, news of the outbreak was kept secret. “The reason for a high death toll due to coronavirus was the presence of 700 Chinese religious students in spiritual schools in Qom,” said Dr. Mohammad Hossein Bahraini, head of the Medical Science University of Mashhad on February 24.

“Unfortunately, three weeks have passed since the coronavirus outbreak in Qom, but it was announced very late”, said Ahmad Amirabadi Farahani, a lawmaker from Qom on February 24, who announced that 50 people died during that time.

“In Iran, the outbreak of coronavirus was rumored. But there were no free and independent media who dared to announce the news and accept the consequences. There were some rumors, but the governmental bureaucratic system said these are conspiracies and they want to bring us down. They said the cause of the deaths is due to influenza B and it is its period. They said we will arrest anyone that says any news and insist on it. Denial after denial. Why?” said Abbas Abdi, on the Fararo website on March 27.

The Iranian regime took no preventive measures about the outbreak of the virus. On the contrary, they doubled up their financial and export relations and saw it as an opportunity to get closer to China. All the countries stopped their flights to China, but Iran increased it. Iran, through Qom, became the second exporter of the coronavirus around the world. Some 30 countries announced their affected came from Iran. “Iran was the reason of coronavirus outbreak in 17 countries, including Iraq”, said Dr. Edham Esmail, Representative of the WHO in Iraq.

Spread of Coronavirus in Iraq: Another Souvenir of Iran’s Regime Along With Terrorism and Chaos.
The mullahs’ regime has been identified as responsible for the #coronavirus outbreak in Iraq due to its inaction and cover-up in #Iran. #COVID2019 https://t.co/qgqDN3XRct

“Why despite China’s experience and early day warnings of the Health Minister, we permitted the people to gather, go shopping without any restrictions which resulted in a high peak at the beginning of the New Year? Mr. President! Why despite begging for doctors and dedicated nurses in hospitals to stay home, did you permit some careless people to travel between cities?” said Mostafa Mirsalim, Head of the Central Committee of Motalefeh Party in a letter to Rouhani on March 28.

Rouhani clearly ordered not to quarantine the cities. “Rouhani is against quarantine because of the JCPOA (2015 international nuclear deal) and the head of our government believes that at the moment it is the best chance to solve the sanctions problems and start the negotiations. His constant insistent to ease the sanctions and incitement of the international community’s sensibility shows this. It seems this policy is his priority,” said Abbas Abdi a so-called reformist journalist.

Implementing quarantine such as in France or the UK needs enough governmental management powers. Power in executive and decision-making, providing enough necessary materials and trust of the population. None of these structures exists in Iran.

The regime has spent 100 billion dollars for war in Syria. Yearly about 700 million dollars is the estimated support by Iran to Hezbollah and 100 million to Hamas and billions of dollars of support for Houthis of Yemen.

he Department of Treasury on Tuesday sanctioned the governor of the Central Bank of #Iran for allegedly funneling millions of dollars to support Hezbollah.https://t.co/8JYeBBpHGb pic.twitter.com/ELPPw7DUCw

In these circumstances, the Iranian people have absolutely no trust in the regime. For the regime, its terrorist agenda in the region is more important than the people’s lives. The regime considers the coronavirus outbreak as an opportunity to push the international community to lift or relive the sanctions.