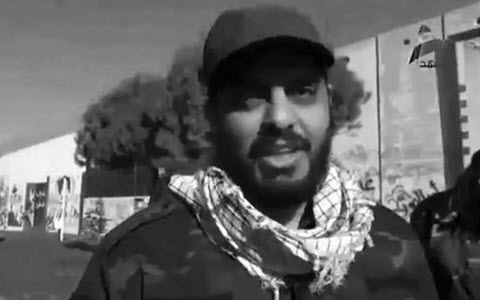 The trip by Qais al-Khazali, the founder and leader of the Asaib Ahl al-Haq militia, or League of the Righteous, was organized by Lebanon’s Iranian proxy Hezbollah, the powerful terror group and arch-foe of Israel.

The video was aired by Asaib Ahl al-Haq al-Ahd TV station Thursday night showing al-Khazali along with several other people in military uniforms as they showed him around areas overlooking Israeli towns and villages. One of those guiding al-Khazali points to a mountainous region in a distance and tells him “this is Golan” in reference to the Golan Heights that was captured by Israel from Syria during the 1967 Mideast war.

Al-Khazali is later seen standing next to a wall on the border near the Fatima Gate in the Lebanese border village of Kfar Kila.

“We declare our full readiness to stand united with the Lebanese people and the Palestinian cause in the face of the Israeli occupation,” he can be heard saying in the recording.

Asaib Ahl al-Haq spokesman Jawad al-Tlibawi told AFP that the visit was “in solidarity with the cause of Arabs and Muslims, with occupied Palestine.”

In a statement, Prime Minister Saad Hariri said the visit took place six days ago and was a “violation of Lebanese laws,” without specifying further.

He added that he had instructed authorities to investigate and “take measures to prevent any person from carrying out military activities on Lebanese territory… and to prevent the person in the video from entering Lebanon.”

Asaib Ahl al-Haq is an Iran-backed group that is one of the main components of Iraq’s Hashed al-Shaabi paramilitary force. It staged spectacular attacks against US troops before their withdrawal from Iraq in 2011.

Hezbollah has sent advisers to assist the force in their battle against the Islamic State terror group.

The Lebanese terror group is also fighting in neighboring Syria, and has been accused of assisting Houthi rebels in Yemen.

Its regional interventions have been a source of tension in Lebanon, and were cited by Hariri when he announced last month that he was resigning.

He later withdrew his resignation after talks that saw Lebanon’s Government Issue a statement reasserting a policy of non-interference in regional conflicts.

Israel fought a devastating war against Hezbollah in Lebanon in 2006 that killed more than 1,200 Lebanese, mostly civilians, and 120 Israelis, most of them soldiers.

Israel withdrew its forces from southern Lebanon in 2000, ending a 22-year presence in the country, but the two nations remain technically at war and there have been occasional skirmishes on the border.

Previous articleMissiles Fired at Saudi Arabia Have ‘Common Origin’ Bearing Logos of Iran Regime
Next articleThe U.S. Administration’s Pick for the Iran Post Will Likely Back a More Aggressive Stance