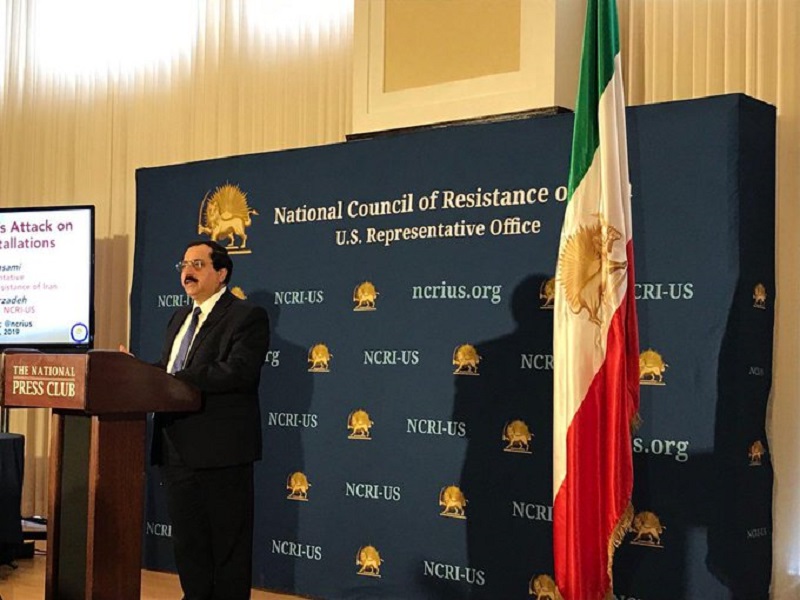 International media organizations have given widespread coverage to the latest revelations by the National Council of Resistance of Iran (NCRI) regarding the Iranian regime’s September 14 missile and drone attacks on Saudi Arabia’s oil installations.

Iran’s main resistance group claimed Monday to have intelligence detailing how Tehran was behind the recent attacks on a Saudi oil facility — just days after Iranian President Hassan Rouhani challenged the international community to provide such evidence of its involvement.

The National Council of Resistance of Iran (NCRI) said it has received information from within the government that detailed the missile and drone attacks on Saudi oil facilities on Sept. 14.

The largest resistance group to the Iran regime presented evidence on Monday that Tehran carried out the damaging Sept. 14 attack on Saudi Arabian oil facilities from a base inside Iran.

The National Council of Resistance of Iran held a Washington press conference to release a 22-page report based on its in-country intelligence network.

The group declared that the authorization for the strike, using missiles and drones, came from the top mullah.

“Ali Khamenei, supreme leader of the regime, directly ordered the commanders of the operation to a conduct the attack,” the NCRI report said.

The US Representative Office of the National Council of Resistance of Iran (NCRI-US) shared detailed intelligence purported to show the Islamic Revolutionary Guard Corps (IRGC) launched the attack from Iranian territory, and that Iran’s Supreme Leader Ali Khamenei ordered the attack and Iran’s President Hassan Rouhani approved it.

“Supreme leader Khamenei made the decision to make such an attack on Saudi oil installations,” said NCRI-US Deputy Director Alireza Jafarzadeh at the press conference.

Jafarzadeh said Iran’s Supreme National Security Council (SNSC) met in July to discuss the issue and that top commanders of the IRGC were involved in the planning and implementation of the operation.

Jafarzadeh said the information comes from the MEK [Mujahedin-e Khalq] network inside Iran.

IRAN was behind last month’s attacks on two oil facilities in Saudi Arabia which sent the price of oil soaring, according to a report from its opposition-in-exile the National Council of Resistance of Iran (NCRI).

NCRI spokesperson Shahin Gobadi said the simultaneous attacks originated inside Iran: “It was a blatant act of war that Khamenei, Rouhani, Zarif, and other regime heads were responsible for in deciding, approving, and implementing.”

IS THEIR INTEL GOOD?

IT has been accurate in the past and the NCRI said this extensive tranche came from inside the Iranian regime.

Not only does their report name names, but it also lists the types of missiles used, their capabilities, place of manufacture, and details the movements of IRGC personnel they said were involved in the raids.

“These Intelligence reports indicate that the operation resulting in the attack involved the highest levels of the IRGC who directed it at every step,” said the NCRI.

“Ali Khamenei, supreme leader of the regime, directly ordered the commanders of the operation to conduct the attack, and the tactical command headquarters for the operation deployed from Tehran to Khuzestan province (southwest Iran) one week prior to the attack.”

Previous articleIRGC Commander Confirms MEK Information on ‘Missile-Cities’ Hidden Under Iran’s Mountains
Next articleFormer Iran Regime Lawmaker: The Shah Was Corrupt, but the People Were Clean. Today, Everybody Is Corrupt, but the Leader Is Clean!