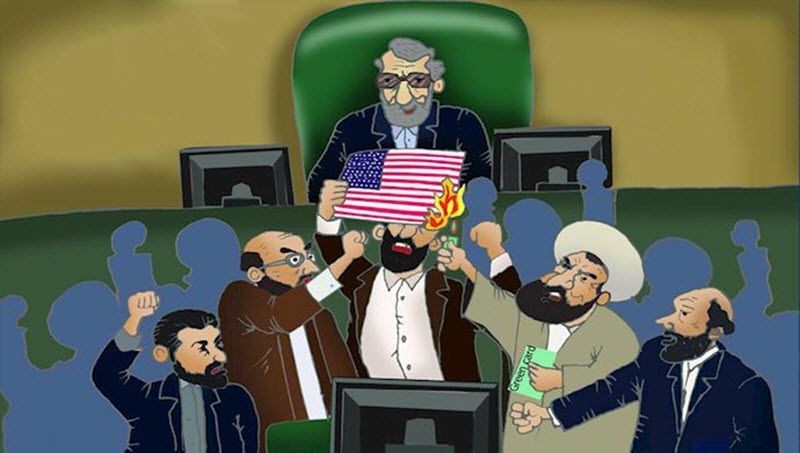 It’s been a while since some of Iranian regime’s state media have started raising the issue of holding direct negotiations with the United States, with some of the prominent figures of regime’s so-called reformist group writing an open letter to regime leader Ali Khamenei, pointing to Barack Obama’s era as a lost opportunity and calling on regime’s decision makers to take a nationalistic step by holding unconditional talks with the United States regardless of the White House’s psychological wars, thus to take the first step towards resolving problems and differences.

The suggestion, however, has been harshly criticized by the group close to regime’s leader Ali Khamenei, and rejected as being submissive and disloyal.

Why the issue has been raised by Rouhani’s circle

New developments point to the fact that the issue of holding direct talks with the United States has now turned into the most important conflict between regime’s rival bands, as US withdrawal from the JCPOA is directly related to sanctions and their consequences.

There are meanwhile a few factors that have escalated the issue within the regime:

– Getting disappointed at Europe and failure of the illusion assuming that Europeans will decide to confront the United States over the Iranian regime.

– Another contributing factor which has made the pro-negotiations group to raise their voice is the experience of North Korea, who has decided to hold direct negotiations with the US.

– Another important factor that imposes itself as the most decisive parameter on regime’s political calculations is the society’s extremely eruptive state, to the extent that it’s quite possible that an unpredicted event could lead to an explosion in this gas filled atmosphere, as Rouhani’s vice president Eshaq Jahangiri has pointed out.

Will direct talks with the US bring the regime out of its deadlock?

The answer to this question is “absolutely not”, a response that reflects both a rational argument and the proven result of a tested experiment as well.

When it’s said that holding direct talks with the US won’t bring the regime out of its crises, it actually points to the fact that even the JCPOA with all its benefits failed to do so.

Pro-negotiations group, however, point in their media to North Korea as a successful experience, saying “thanks to a clear understanding of Trump’s global approach, North Koran leader decided to change the direction of its foreign policy and no longer insist on confrontation, thus giving the green light to holding bilateral talks with the United States –and not multilateral talks with the international community– that involves all the disputed issues –and not just part of them– with the result being the historic US-North Korea summit and signing a document for settling all the differences.” (State-run Bahar website, June 16, 2018)

Ahmad Zeiabadi, political analyst close to regime’s so-called reformist group, writes in this regard “it seems that US-Iran conflict is edging closer to a turning point, the same way the conflict between US and North Korea did. So, Iran, too, has to understand that it won’t be able to go on like this for long. It seems that such negotiations are going to take place during this term or the next one.”

Why pro-negotiations’ arguments are not rational?

If you look at the pro-negotiations’ arguments once more, you’ll find out that they intentionally ignore the fundamental difference between North Korea and Iran’s societies.

The Iranian regime is faced with a boiling and roaring society as well as a powerful political alternative that, as acknowledged by regime’s own officials, turn every labor protest quickly into a political one and a security threat for the regime. “Only two persons in each city will suffice to turn any labor protest into an anti-regime political one of the type favored by those who seek overthrowing the regime,” says Khamenei-linked theorist Aliakbar Raefipour. That, however, is by no means the case in North Korea.

Moreover, the North Korean regime is a coherent and integrated one, while the Iranian regime is not, something that has stripped the regime of the ability to make any decision.

“What will possibly draw the Islamic Repulic to the negotiating table is the objective criteria that seems to be developing,” says Zaidabadi.

That’s somehow reflected in Mohamadreza Tajik’s remarks as well. Pointing to society’s eruptive state, state analyst Tajik asks “is that objective or subjective criteria, or both?”

By objective criteria, it seems they’re referring to Iran’s social status, a status that has made regime’s so-called reformists anxious and forced them to raise the direct negotiations issue by writing an open letter to Khamenei. They are however apparently unaware of the fact that the same objective criteria, namely a powerful alternative backed by the people who are seriously willing to overthrow the regime, is regime’s biggest obstacle on its way towards such negotiations.

There are still others who argue that in terms of its social acceptance, such negotiations will be a smooth path for the regime to follow and there’ll be no threats on the way as people don’t welcome new sanctions and are praying to god that the regime backs down so the sanction-raised economic pressures will be eased.

Although this could be true to some extent, but before moving in that direction it should be asked:

How and under which conditions does the regime have to go to the negotiating table?

This could probably be the 12 demands that the US Secretary of State has earlier declared, with each and every one of them acting like a poisoned chalice for the regime.

As one of the 12 conditions, US Secretary of State says “we also advocate tirelessly for the Iranian people. The Iranian regime must improve how it treats its citizens. It must protect the human rights of every Iranian.”

If the mullahs are ever going to agree to this one single demand thereby stopping oppression, torture and execution, then it’s quite obvious in advance that the Iranian people will leave no sign of the regime. It’s however clear that overthrowing the Iranian regime is only on Iranian people and their organized Resistance, particularly considering the fact that the Iranian people, the Resistance of Iran, and the Iranian regime have all experienced the Shah’s era and have seen with their own eyes how it collapsed in less than two years when its intelligence service SAVAC was forced to stop torture under president Carter’s human rights policy requirements.

How the Iranian regime is compared to the Shah’s:

– The mullahs’ regime is much more disintegrated than what Shah’s was.

– Iran’s society is much more ignited than what it was during the Shah’s regime, with the PMOI’s organized resistance as the driving force being incomparable to what it was under the Shah.

The deadly part of the story, however, is that despite all the threats the negotiations will bring for the mullahs, the issue that still remains on the table is that avoiding the negotiations will also be as life-threatening and will lead to collapse, and this is the paradox in which Khamenei is struggling!