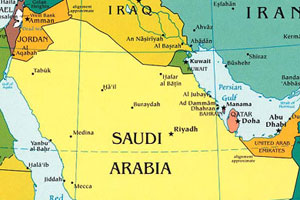 Saudi Arabia has refused a visit by Iranian foreign minister on the grounds that it is not yet time to ‘normalize’ relations with the regime.

Alquds Alarabi wrote: “Riyadh believes that the Iranian regime has occupied Syria and it is this regime that is supporting Bashar al-Asad militarily and economically, and that it participates in the operations against the Syrian people sending fighters and experts to this country to suppress the Syrian revolution.”

Saudi’s firm stance comes after Iranian foreign minister Zarif had announced that next week he would be going to Kuwait and Oman and would then visit Saudi Arabia.

Saudi Arabia has been concern over the meddling of the Iranian mullahs in Lebanon, Syria, etc and also about the Nuclear program of the regime.

Recently Prince Turki Al-Faisal Al-Saud, chairman of the King Faisal Center for Research and Islamic Studies and former director-general of the Kingdom’s General Intelligence Directorate warned that the kingdom has been direct in its dealings with Iran about the issues of tension between the two countries, telling its officials, “You can’t have it both ways. You can’t deal with us and then go and support somebody who wants to overturn us. And this is what they’ve been doing in Lebanon, this is what they’ve been doing in Syria, this is what they’re doing in Bahrain, and what they’re doing in Iraq etc., so this is how we deal with Iran.” The former Saudi ambassador to the US said.

In October 9th, Reuters wrote: “The Saudis’ worst nightmare would be the administration striking a grand bargain with Iran,” said former diplomat Robert Jordan, who was U.S. ambassador to Riyadh from 2001 to 2003.

The Saudis now fear Obama may be tempted to thaw ties with Tehran by striking a deal to allow inspections of its atomic sites in return for allowing Iranian allies to go on dominating Arab countries such as Lebanon, Syria and Iraq. That such a bargain has never been publicly mooted from within the Obama administration has not stopped Saudis voicing their concerns.