According to a Bloomberg report, a senior adviser to the Crown Prince said in a statement after Tuesday’s meeting that “relations had undergone a period of difference of opinion”. “However, today’s meeting has put things on the right track, and marked a significant shift in relations, across all political, military, security and economic fields.”

The praise for Trump’s “great understanding” of US-Saudi relations reflects the eagerness for a renewed alliance after deep strains with former President Barack Obama, who crafted the 2015 nuclear deal with Iran.

The new administration sees Saudi Arabia “as a crucial part of the Middle East and an important country to have a positive relationship with – even if there are irritants in the relationship,” said Simon Henderson, a fellow at the Washington Institute for Near East Policy and director of the institute’s Gulf and Energy Policy Program. “This is at odds with the Obama administration, so they want to make that clear distinction.”
Donald Trump and Saudi Deputy Crown Prince Mohammed bin Salman take their seats for lunch in the State Dining Room of the White House in Washington, US, March 14, 2017. (Reuters)

The report said that Salman had lunch with Trump and aides at the White House on Tuesday. That’s a higher-profile meeting than an initially planned photo opportunity, according to Henderson. 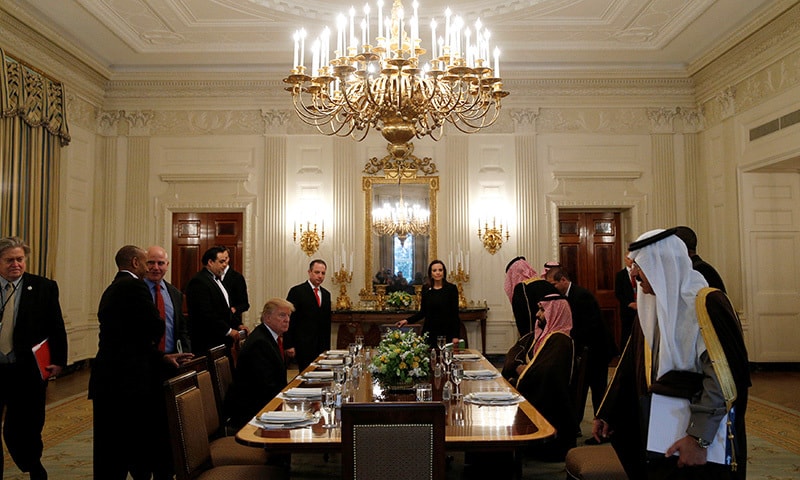 Mohammed bin Salman’s visit follows a trip he made to Washington in June after unveiling his Saudi Vision 2030. Saudi Arabian Oil Co., known as Aramco, is also planning potentially the world’s biggest initial public offering, with as much as $100 billion in shares expected to be sold, said the report.

The Saudis also said Trump and the deputy crown prince “share the same views on the gravity of the Iranian expansionist moves in the region. “Saudi Arabia’s Deputy Crown Prince Mohammed bin Salman bin Abdulaziz Al Saud met with US President Donald Trump on Tuesday in Washington DC to discuss the strengthening of bilateral relations between the two countries and regional issues of mutual interest.