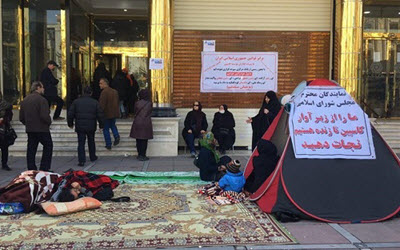 The round-the-clock gathering, started from March 5, continued on Monday March 13. Accompanied with their families, the demonstrators had set up tents, demanding that their looted money be returned.

It should be noted that many people across the country had trusted Caspian Credit Company enough to decide to invest there, as its name was listed in Central Bank’s official website as an authorized institution on March 17, 2016.

While the situation of the Caspian Credit Institution remains unaddressed, investors say that they can no longer trust the Central Bank’s long-term promises since it was this bank in the first place that laid the foundation of the Institute on lack of transparency and truth, causing the investors to make losses for nine months by the bank’s putting the institute’s name on its website.