The Exclusive Interview About the Results of Astana Summit 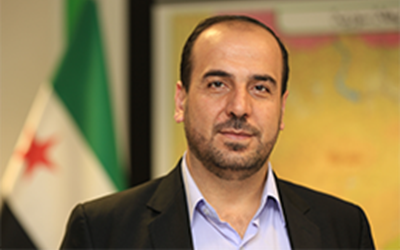 NCRI – The member of the political delegation of the Syrian National Coalition in Astana Summit Naser al-Hariri called on the international community to strongly defy against the criminal interference of the Iranian regime in Syria as well as fostering solidarity with Syrian revolutionaries.

In an interview with IranNTV, Naser al-Hariri referred to the sabotages of the Iranian regime and said: “In Astana Summit, Iran’s stance was like its position on the ground; a bad and negative stance.”

The Mullahs’ regime is involved in the delay of the trilateral statement which was issued in the summit. They insisted that any phrase that refers to the political transition shall be removed from the statement. They wanted that the international resolutions on Syria must be ignored since it does not meet their demands. The Iranian regime and its militias are responsible for the violation of the ceasefire.

In our opinion, the Iranian Revolutionary Guards Corps (IRGC) and the militias of the Iranian regime do not differ from other terrorist militias such as ISIS and Al-Qaida because all of them have the same ideology.”

Naser al-Hariri also talked about the demands of the Syrian opposition before the next round of talks which is going to be held in Geneva. He stated: “the international community must take firm and serious steps against the terrorism of the Mullahs in Tehran; The Mullahs’ regime that destroyed Iraq and it has now ruined Syria. The Iranian regime is playing with the security of the region and it interferes in different countries including Yemen and Bahrain.

At the end, Naser al-Hariri stressed the solidarity between the Syrian Revolution, Syrians and the Iranian Resistance. He stated:”the coordination and cooperation with the Iranian Resistance are going very well. We support their legitimate demands for the freedom of Iran. The Iranian Resistance plays a prominent role in the future of Iran; a country that respects its citizens and creates equality among them. A country that makes efforts to create social and economic prosperity in all areas in Iran ;that establishes a friendly relationship with all of the neighboring countries and acts in favor of Iranians and people of the region in the international community and regional alliance.”

Previous articleThe Iran Regime Should Not Play Any Role in Syria
Next article  Iran: 13 Young Boys and Girls Were Arrested for Attending a Party