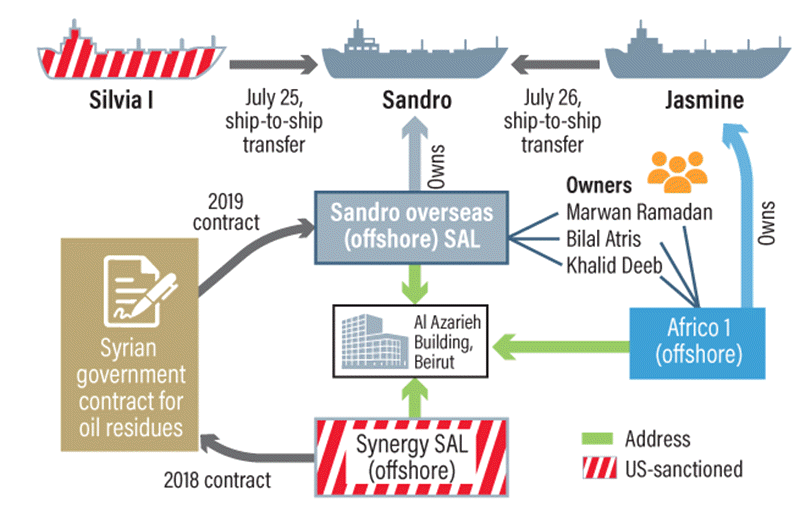 Business records and tracking data indicate that two shadowy Lebanon-based companies who own and operate tankers have been secretly transporting Iranian oil in the Mediterranean, while analysis of one company suggests the man running the operation may be a prominent Syrian businessman sanctioned by the United States.

TankerTrackers.com data shows that the Sandro and Jasmine tankers have been turning off their location transponders and conducting transfers of the Iranian oil to or from other vessels off the Syrian coast. Iran’s regime uses these tactics regularly to evade U.S. sanctions.

The Iranian-flagged Suezmax tanker Silvia I conducted a ship-to-ship transfer of roughly 500,000 barrels of crude oil to the Sandro tanker, just off Syria’s coast, on July 25. The Sandro turned off its transponder five days later and has not reported its position since. However, by using satellite imagery, TankerTrackers.com has tracked the vessel.

Likewise, the Jasmine, which was already on the US government’s radar as a result of illicit activities, also went dark in the Mediterranean.

Both ships are owned by Lebanese firms; Sandro by Sandro Overseas (Off Shore) and Jasmine by. Africo 1 (Off-Shore) SAL, but little is known about them. The listed Lebanese owners of these companies – Marwan Ramadan, Bilal Atris and Khalid Deeb – could not be reached for comment.

Some, like the Syria Report business newsletter, believe that Syrian executive Samer Foz is highly likely to be involved with Sandro Overseas (Off Shore) after the Syrian Oil Ministry awarded the company with a contract to process oil residues from eastern Syria, which has a very controversial move. Sandro Overseas (Off Shore) will replace Lebanese company Synergy SAL Offshore, which was also involved in Iranian oil shipments and was sanctioned by the US for this in June.

The U.S. Treasury said in a press release: “Synergy SAL (Offshore) has shipped tens of thousands of metric tons of Iranian oil into Syria in the past year by sea.”

However, that is far from the only tie between the two companies. They actually have the same address, both operating out of a co-working space in Beirut, at which neither was present when The National visited. (Africo 1 (Off-Shore) also uses the same address and was not present.)

The U.S. sanctioned Foz in June, accusing him of “profiting heavily from reconstruction efforts in Syria, including through luxury developments on land seized by the Syrian regime from its own people”.

The U.S. Treasury Department statement said: “Samer Foz, his relatives, and his business empire have leveraged the atrocities of the Syrian conflict into a profit-generating enterprise.”