U.N. resolution on Syria could be voted by end of week: Hollande 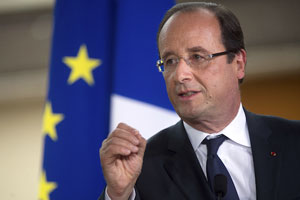 (Reuters) – A U.N. resolution framing the Russia-U.S. deal on removing Syria’s chemical weapons must include the threat of some kind of sanction in the event that Syria does not comply with the accord, French President Francois Hollande said on Sunday.

Speaking on French prime-time television, Hollande said resolution could be voted by the end of the week. He added that a political and diplomatic solution to the wider Syrian conflict was possible but stressed that the option of military strikes must remain on the table.