U.S. Policy on Iran Should Include Human Rights Commitment 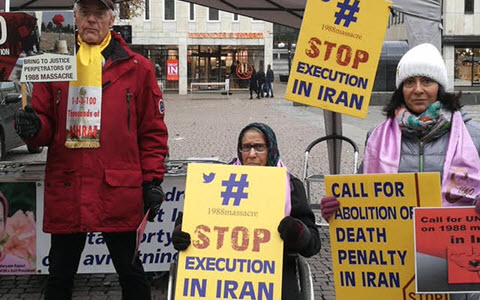 NCRI – The new U.S. policy on Iran, including Donald Trump’s decision not to recertify the 2015 nuclear agreement, is supported by the vast majority of ordinary Iranians, but they also want a strategy to deal with the Iranian regime’s dismal human rights record.

These people are concerned about the prospect of nuclear war but they are also concerned about the daily human rights violations perpetrated by the Iranian regime against religious and ethnic minorities, women, and anyone who dares to criticize the government.

Soona Samsami, the United States representative for the National Council of Resistance of Iran (NCRI), wrote for the Independent Journal Review: “For the vast majority of Iranians, the nuclear deal has underscored a more basic question: when will the US stand up for those values for which it is admired, including in Iran?”

The Iranian regime has been allowed to launch ballistic missiles, ban inspections of nuclear sites, interfere in regional politics, and slaughter its own people with impunity for years now.

• In 2014, they executed Reyhaneh Jabbari for killing an Intelligence Ministry official who was attempting to rape her.

• In 1988, they massacred 30,000 political prisoners, mostly activists of the People’s Mojahedin Organization of Iran (PMOI/MEK), and those who organised this brutal genocide still hold high-ranking positions in Iran under the so-called moderate Hassan Rouhani.

The international community should impose consequences on the Iranian regime for these actions, sanctioning aggressive behavior instead of rewarding it. That is what many in Iran hope the new US policy will do.

Samsami wrote: “A deal that penalizes Iran for bad behaviour also sends an important message to the Iranian people, as well as the peoples in the region terrorized by the regime: America is with you if you are deprived of your rights and seek democracy and justice.”

Many people from around the world have commended the Iranian people’s commitment to freedom against a monolith determined to crush them and it is time for those people to stand with the Iranian people and support their call for regime change.

The NCRI has long called for regime change so that the people of Iran can live in a democracy.

The NCRI coalition includes the MEK, whose members risk their lives to provide evidence of the Iranian regime’s crimes including their secret nuclear weapons programme (in 2002) and the 1988 massacre.

Trump’s policy should support the Iranian Resistance because that, more than anything else, will terrify the mullahs. It should also tackle the Iranian regime’s nuclear program, and its destabilization of the Middle East via the Islamic Revolutionary Guards Corps (IRGC).