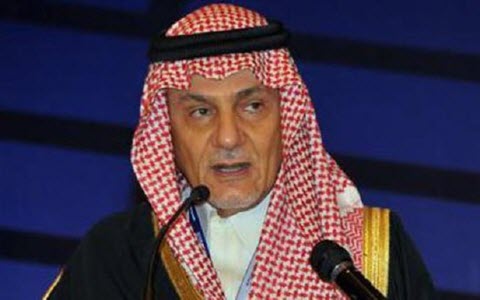 NCRI – The former Saudi Ambassador to the U.S. and U.K. Prince Turki al-Faisal has admired the Donald Trump administration for its clear and tough strategy on Iran regime including his recent refusal to certify Iran as compliant with the nuclear deal.

At the Middle East Policy Forum in New York on Sunday, Faisal said: “If you want to put pressure on Iran, you have to do whatever it means to do that and decertification is one way of putting in that pressure to make them live up not just to the letter of the deal, but the spirit. The signers of the deal when they signed it portrayed the holy picture that it was going to turn into a very friendly and open and hospitable place to do business with, but that hasn’t happened.”

The Middle East Policy Forum is organised by the Israel Policy Forum, a think tank aimed at supporting and mobilizing the American Jewish community.

Faisal noted that the nuclear deal, formally known as the Joint Comprehensive Plan of Action (JCPOA), failed to restrain the Iranian Regime in their ambition to conquer the Middle East and instead allowed their influence over Iraq, Syria, Lebanon and the entire Middle East to grow.

He said: “The basic failure of the deal was to deal with (these) Iranian extraterritorial ambitions.”

Also in attendance at the forum was Efraim Halevy, former director of Israel’s Mossad Security Agency, who contrary to Faisal and current Israeli Prime Minister Benjamin Netanyahu believed that the pact should stay in place because it allowed a period of time (10-13 years) for the international community to deal with issue coming from Iran that were not included in the JCPOA, like terrorism and missile capabilities.

However, he did note that the deal was not an overwhelmingly positive one but claimed that was because Israel wanted the US to focus on Iran’s nuclear capability at the expense of everything else.

He said: “Having said that, the Iran deal was not an ideal deal. But this was because Israel did not wish the negotiations to include all the items on the agenda. [We wanted the United States to] focus on the nuclear issue and nothing else. “We didn’t want to delay the deal, we wanted it to come as quickly as possible and be as effective as possible. Things are happening in Iran today, changes are happening in Iran today.”

Previous articleIran: Uprising of Looted People in Tehran and Confrontation With Repressive Police Force
Next articleU.S. Policy on Iran Should Include Human Rights Commitment