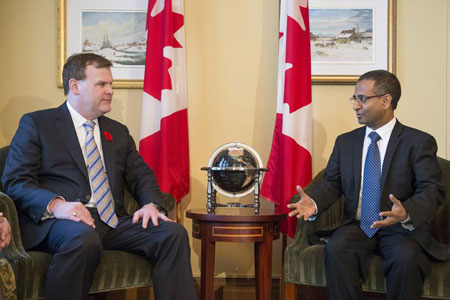 The United Nation’s Special Rapporteur on the situation of human rights in Iran praised the Canadian government for its stand on the criticism of the rights violation in Iran.

“Canada doesn’t equivocate. It’s clear. It takes a principled stand and it speaks out when it believes certain thresholds have been passed,” Dr. Ahmed Shaheed told The Canadian Press in an interview.

“I like that. I’ve been a lone voice in some instances.”

He pointed to Baird’s criticism this week of Iran as a “murderous regime” in his denunciation of the execution of 26-year-old Reyhaneh Jabbari.

“Canada has been the leading, clearest voice on this subject,” said Shaheed.

Baird praised Ahmed Shaheed’s work for shining a light on the human rights situation in Iran that has deteriorated in the last year under Hassan Rouhani.

“Unfortunately the human rights situation has not only not improved, by any definition,” Baird said, “it’s actually gotten worse.”