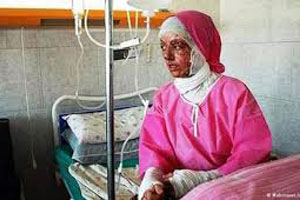 NCRI – The Iranian people continue to protest the new wave of acid attacks against Iranian women and girls carried out by gangs affiliated to the Iranian regime.

Despite the fact that the Iranian regime has been preventing people from holding public protest against the brutal attacks, posters were distributed in Tehran condemning the attacks.

In the city of Shiraz in southern Iran, students protested against the attacks displaying posters in streets calling for an end to the brutal attacks against women.

Protests were also held in university campuses despite the heavy presence of security forces, there to intimidate the students and prevent them from joining protests in the country.

One of the posters distributed in Shiraz read: “My sister is the victim of an acid attack thanks to the rule of this regime. Shame on Khamenei [Ali Khamenei, the regime’s supreme leader].’

The acid attacks have triggered rallies in the streets of Isfahan and Tehran and calls for action across social media.

Facing the public anger, Iranian regime authorities claimed to have arrested several suspects last week in connection with the incidents, but say they don’t have enough evidence to hold them.

In a desperate attempt to counter the growing anger expressed by the Iranian people, a number of senior Iranian officials claimed that the recent spate of acid attacks on women in the country “is the work of foreign agents,” whom he accused of seeking to undermine the stability of the regime.