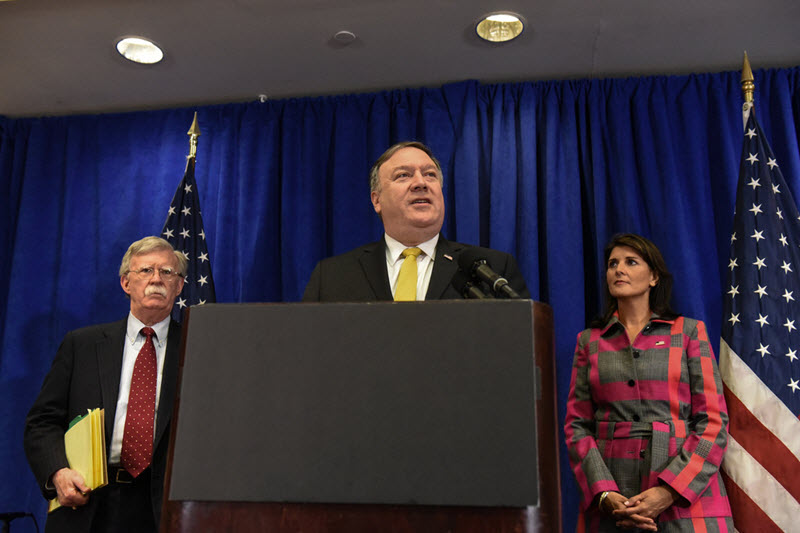 The US State Department has released an extensive report detailing the Iranian Regime’s “destructive behaviour” at home and abroad shortly before the 40th anniversary of the mullahs stealing power.

The report, entitled Outlaw Regime: A Chronicle of Iran’s Destructive Activities, goes into stark detail about Iran’s support for terrorism, illicit financial activities, abuse of human rights, environmental exploitation, its missile programme, a threat to cyber security, and a threat to maritime security.

The report starts with a letter from US Secretary of State Mike Pompeo, who explains why the US withdrew from the 2015 Iranian nuclear deal and how the Iranian Regime will suffer as a result.

He wrote that the current US policy on Iran reflected that Iran is “not a normal state”, arguing that normal states don’t:

• conduct covert assassinations in other countries

• squander their own natural resources

• serve as a sanctuary for terrorists

• call for the destruction of Israel and threaten other countries

Pompeo said that the report served as “a full record of the Islamic Republic’s hostile behaviour abroad and its repression at home beyond the continued threat of its nuclear programme”.

The report makes clear that the Iranian Regime’s support for terrorism has gone on since the start of the Regime, usually driven by the Revolutionary Guards (IRGC) and its Qods Force as well as the Ministry of Intelligence and Security (MOIS).

The report read: “Today, the IRGC-QF is active across the Middle East and has plotted or carried out terrorist attacks in five out of seven continents. Where it is unable or unwilling to act directly, the Iranian regime has mastered the use of terrorist proxy groups like Lebanese Hizballah, Palestine Islamic Jihad, the Bahraini Al- Ashtar Brigades and the Iraqi Kata’ib Hizballah to conduct terrorist attacks.”

This support for terrorist groups has been aided by Iran’s continued development of ballistic missiles – in violation of UN resolution 2231 – and its “opaque and fraudulent financing activities”, which have undermined the integrity and security of the global financial system.

As a result of all of this, the US considers Iran a threat to maritime security in the Persian Gulf and the Red Sea and to cyber security, where they have been engaging in unsafe behaviours for a couple of years, mainly through the use of proxies.

The Iranian Regime is also known to have ignored environmental crises that have led to drought and mass migration in Iran; something not surprising considering their “repeated and systemic abuse of human rights”. The report observes that the Regime’s human rights abuses extend far beyond its borders, with the murder of civilians in Syria and the arbitrary detention of Sunnis in Iraq.

Pompeo wrote: “Iran is a society with so much greater potential. We want to reach a new agreement with Iran that ensures its nuclear activities are peaceful and that its role in the Middle East is constructive. We seek a deal that ensures Iran does not support terrorism around the world and provides for the greater opportunity to its own people. We are prepared to work with the Iranian regime, but only if it makes major changes. Until then, the Iranian regime can rest assured of our firm resolve to counter their destabilizing activities. Given the record we have published today, they should expect nothing less.”

Previous articleEnding the Dictatorship of Mullahs Is up to the People of Iran Now!
Next articleIran Regime Sentences Three to Death for Economic Crimes