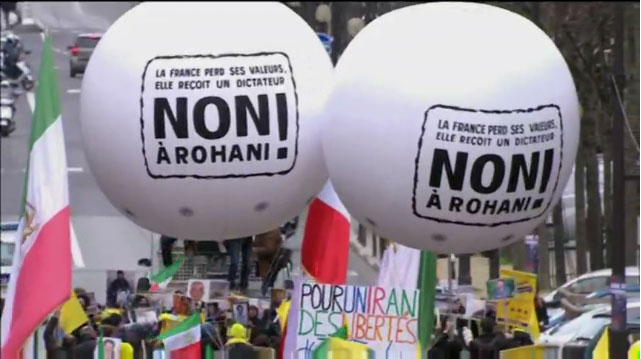 “Europe’s rapprochement with Iran will only prove damaging, as European leaders welcome the head of a regime that is guilty of violating basic human rights,” says Dr. Alejo Vidal-Quadras, President of the International Committee In Search of Justice (ISJ) Committee and, Vice-President of the European Parliament between 1999 and 2014.

He wrote in a piece in Euractive that the recent visit by Hassan Rouhani to France and Italy and France may have been good for trade agreements that were signed during those four days, however this has come at a high moral cost. He said: “The decision to so warmly welcome the Iranian president into the borders of Europe depended upon selling out some of the core concepts of what it means to be a European and a resident of a free, democratic country.”

An international rally drawing thousands of Iranian dissidents, who were accompanied by French and European politicians, human rights lawyers and activists took place in Paris, with the aim of calling attention to that record and demonstrating to Western governments that they send completely the wrong message to the Iranian people when they roll out the red carpet for Rouhani in spite of his crimes.

He writes that, “Although the cynic in me wants to believe that the decision to host Rouhani for high-level trade talks was motivated only by greed, I am willing to accept that the people behind that decision genuinely believe that they can foster a moderating trend in the Iranian regime by reaching out to its president. But such a notion is painfully misguided. Similar efforts with other Iranian leaders in the past have already proved fruitless and ultimately damaging, and the aftermath of this visit to Europe will surely turn out to be no different.”

Many Iranian expatriates and former victims of the regime participated in elaborate street performances and exhibitions to portray the human rights violations that are still running rampant in the country to this day. 2,200 people have been put to death during his tenure, most of them for non-violent offenses, and many for vague, political crimes like “insulting the Prophet” or “enmity against God”. Western diplomacy to solve this problem is missing- in what can only be called criminal negligence.

Dr. Alejo Vidal-Quadras writes that Rouhani is not bothered by executions and has said publicly that executing people “is either the commandment of God or a law approved by the parliament that belongs to the people and we only execute it”. “It is hard to imagine, when the whole world is abhorred by the number of executions in Iran, that the President of that country says it has nothing to do with him.”

He says that the main democratic opposition People’s Mojahedin Organisation of Iran (PMOI or MEK), as well as persons with avowedly pro-Western attitudes or an inclination to create art and cultural expressions deemed “un-Islamic” by the clerical regime and have been through the worst of its repressive policies.
After the release of four American-Iranians this month, it is being realized through their stories that there is a strong anti-Western tendency in Iran that has only intensified in the aftermath of the July 14 nuclear agreement. Their testimonials are steadily making their way to the media, describing physical and psychological abuse and bearing witness to the appalling mistreatment and mass execution of political prisoners. With such messages on the minds of Europeans and American voters, it will be increasingly difficult for Western officials to maintain a policy of wilful ignorance towards human rights abuses in Iran.