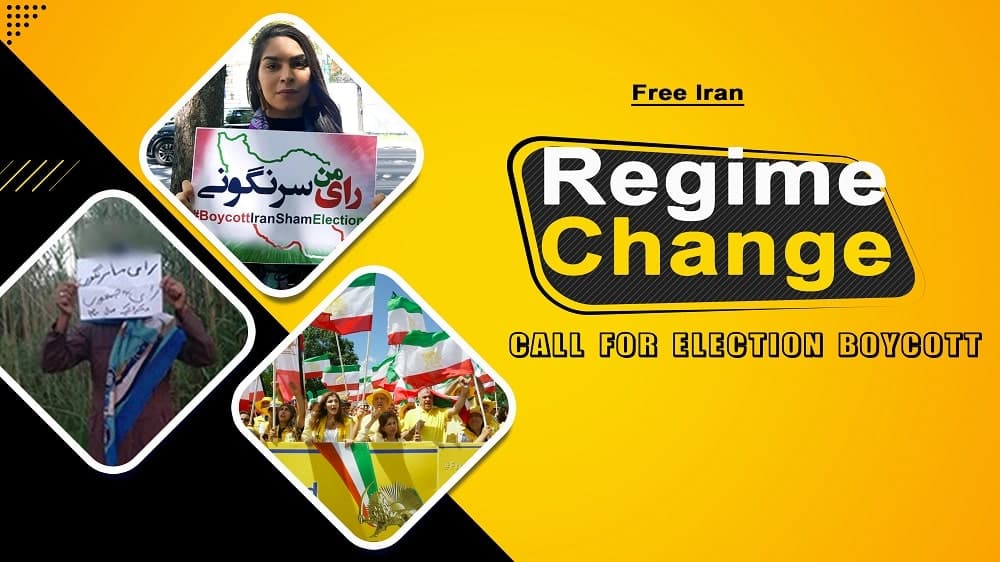 In recent days the regime officials have acknowledged people’s decision to boycott Iran’s sham presidential election and the Iranian Resistance’s successful campaign in popularizing this message for the public.

“The enemy is spreading the notion about the election being useless,” said Mullah Javad Mojtahed Shabestri, member of the regime’s Expediency Council, on Friday.

“Boycotting the ballot box is not the solution to get through the current difficulties,” said Abdollah Haji Sadeghi, the representative of Ali Khamenei, the regime’s supreme leader, in the Revolutionary Guards (IRGC). “Some propagandas are not right and honest. Some have serious programs to use people’s feelings, which will fail due to people’s intelligence,” he added, according to the semi-official ISNA News Agency on Friday.

“Some people are colliding with the enemies’ plan calling for boycotting the election. The enemies, after achieving their goal, are seeking to increase pressures and sanctions [on the regime] and demand more concessions, causing security breaches,” said Yadollah Javani, IRGC’s Political Deputy, according to the state-run Tasnim News Agency on Thursday.

“As the election approaches, the psychological warfare of the enemies against the [regime] using diplomatic means, news and satellite networks, and cyberspace to boycott the elections has intensified,” wrote the state-run Javan daily on Thursday.

“Challenging the system’s structure and relating it to its general policies and management, inducing the election is engineered, provoking dissident to pursue regime change and holding rallies to protest the procedure of vetting candidates, provoking people, particularly those impoverished, to act against the system and accusing officials of not willing to resolve people’s, is the enemy’s tactics,” Javan daily claimed.

The enemy and its activities which have terrified the entire regime is the People’s Mojahedin Organization of Iran (PMOI/MEK) and its internal network of “Resistance Units.” Since 1981, the MEK has been the flagbearer of rejecting the myth of moderation in the regime and defending the Iranian people’s rights to regime change and democracy.

In recent months ahead of the election, the MEK’s Resistance Units have spread their activities across the country, calling for boycotting the regime’s sham election in June. These activities include installing posters, images, and banners to support regime change.

Following the major Iran protests in November 2019, and after the regime killed over 1500 innocent civilians, people’s conflict with the regime has reached an irreversible point. The regime has not resolved people’s economic and social concerns and has increased them by its corruption and warmongering policies. Thus, Iran’s society is on the verge of explosion.

In a bid to face this restive society, Khamenei intends to consolidate power in his regime by pulling Ebrahim Raisi out of the ballot box. Raisi, the current Judiciary Chief, played a key role in the 1988 massacre of over 30,000 political prisoners, mostly MEK supporters.

In recent days, the MEK Resistance Units targeted Raisi and his role in human rights violations by writing slogans across Iran. These slogans on the wall read: “Raisi is the murderer of 30,000 political prisoners, Iranian people’s vote is regime change,” “Down with Raisi,” “Down with Khamenei, hail to Rajavi,” and “Iranian people’s vote is regime change,” were spread in these cities.

The MEK’s efforts Iranian people’s desire for boycotting the regime’s farce election inside Iran has been widely supported by members of the Iranian diaspora in the United States, Canada, and across Europe. They have held dozens of protests echoing the Iranian people’s call for regime change.

Inside Iran and abroad, these activities show why the regime fears a nationwide boycott and how the Iranian opposition’s actions have affected society.

Previous articleIran Election 2021: Khamenei’s Remarks Reflect Fear of Electoral Boycotts, Popular Uprisings
Next articleFree Iran 2021: Iranian Expatriate Rally to Invite the West to Stand on the Right Side of History