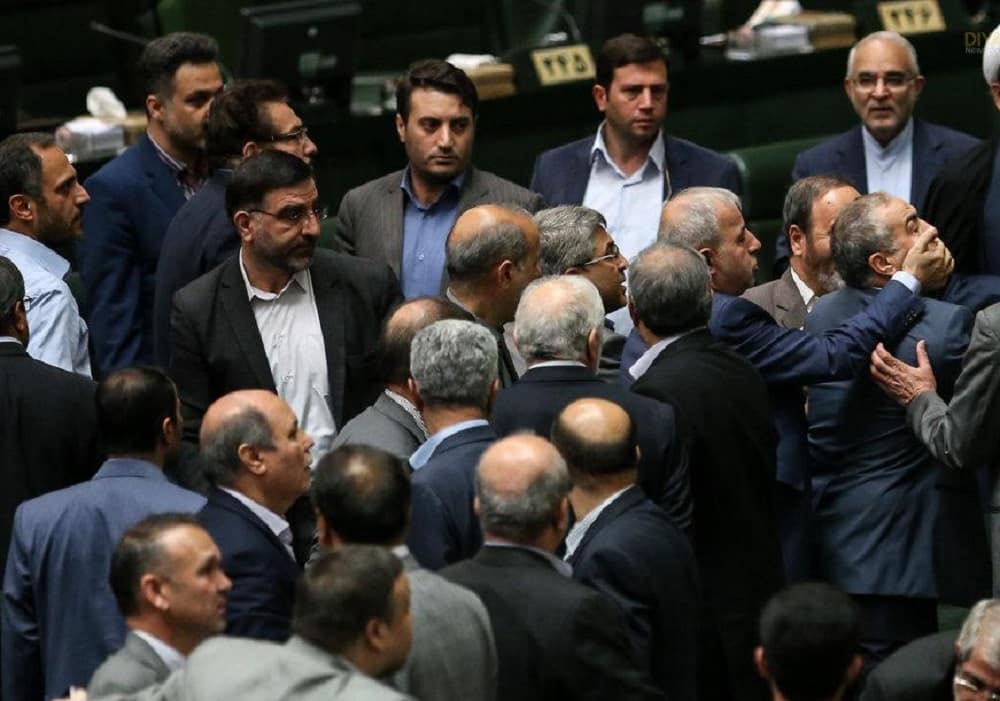 The Iranian regime’s infightings have accelerated days before the sham presidential election. As the regime’s factional feuds continue to amplify, state-run media warn about the “dangerous” consequences for the regime.

Khamenei’s decision to select Raisi is part of his contraction policy and an attempt to unipolar the regime in the face of people’s inevitable uprising.

“The most important concern of the upcoming government is to prevent the emergence and happening of something very horrendous,” wrote the state-run Arman daily on Sunday, acknowledging why Khamenei and his Guardian Council disqualified other candidates; calling people’s uprising “horrendous.”

“This horrendous issue that [Khamenei and his ilk] believe is coming will show itself in the future. They think that if they cannot prevent this terrible thing from happening, the [regime] will face serious challenges. This situation can be a kind of depiction of society, rivals, social actors, people, and historical conditions,” Arman daily adds.

Mohsen MehrAlizadeh, one of the approved candidates, reacted on Twitter to the recent threat by the regime prosecutor in Tehran, who asked the candidates to follow the “red lines” of the regime.

“How do they allow themselves to define a red line for presidential candidates? Suppose Mr. Raisi is worried that in this unequal competition, criticizing him will be interpreted as an attack on the judiciary. In that case, it is better for him to either resign from the judiciary or stop running for the presidency,” MehrAlizadeh said, according to the state-run Khabar-e Vijeh (special news) website on Monday.

Recently, Saeed Ghasemi, a Basij militia propaganda figure, threatened the rival faction and the disqualified candidates, saying he will deal with them “on the street.”

“What causes the likes of Saeed Ghasemi to lose control and say whatever they want to [the rival faction]? Worst, how he allows himself to call for one-on-one combat that could result in violence and more people losing their lives,” Arman’s article adds, calling people’s uprising violence.

“If he continues this manner, it will certainly end in nothing but further hostilities and hatreds. His remarks are like rubbing salt in the wound of people. If these wounds become open, there will be major consequences for all of us, even Ghasemi,” Arman daily warned.

Sharq daily also reminded Khamenei and his faction that the regime’s so-called “reformist” faction had played a key role in deceiving the public and other crimes of the regime. Sharq also warned about the rival faction’s revelation of the regime’s crimes and their consequences.

“Hearing the [regime’s] realities from those have access to the ‘untold.’ The [hollow promises of reformism] besides its attractiveness, could act as the safety valve relieves the pressures that in the absence of it can lead to [uprising],” Sharq’s article reads.

But, as it comes to the Iranian people, neither regime’s factions are “attractive.” During the major uprisings in 2018 and 2019, Iranians chanted “reformist, hardliner, the game is over.”

In another article on Tuesday, Arman daily warned about the consequences of the regime’s factional feuding and remarks by the likes of Ghasemi.

“The system should seriously warn and intimidate those violating people’s rights. If the situation becomes radicalized, it will damage the election. Days before the election, intimidation [by Khamenei’s faction] will have the opposite result,” Arman’s article reads.

“Those speaking in this way make few mistakes: first they radicalize the society, and secondly, there will see the opposite result. We are looking at the bottom of society, unaware that danger could come from the top,” Arman warned about the widening rift at the regime’s top.