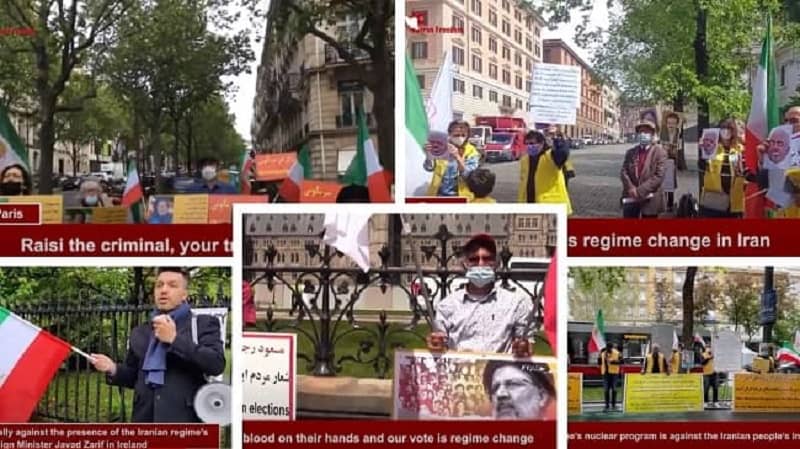 Simultaneous with growing calls in Iran for boycotting the regime’s sham elections in 2021, Iranian expatriates and freedom-loving people in different countries across the globe supported the Iranian people’s desire for a free and democratic Iran.

Supporters of the People’s Mojahedin Organization of Iran (PMOI/MEK) and the National Council of Resistance of Iran (NCRI) held rallies against the Iranian regime’s sham presidential election. They also condemned Mohammad Javad Zarif’s visit to some European countries, underlining Zarif’s role in terrorism. Iranian activities in Europe also demanded the expulsion of all Iranian regime’s agents from the EU countries.

In Paris, France, MEK and NCRI supporters chanted slogans against Ebrahim Raisi, the preferred candidate of the regime’s Supreme Leader Ali Khamenei. Raisi is one of the main culprits of the 1988 massacre of over 30,000 political prisoners. Iranians chanted: “Mullahs have blood on their hands. Our vote is regime change in Iran,” “Raisi the criminal, your trial is on the way,” and “Iran has not forgotten that [Raisi] is the butcher of the 1988 massacre.”

On Thursday, Iranians held a rally against Zarif’s presence in Dublin, underlining his role in spreading terrorism. They chanted, “Zarif gets lost, the murderer gets lost,” and “Zarif get lost, terrorist get lost.”

On Monday, the MEK and NCRI supporters held a rally in Italy, protesting Zarif’s presence. They also voiced their support of the Iranian people’s demand for regime change. They were heard chanting: “Our vote is regime change in Iran.”

On Tuesday, members of the Iranian diaspora in Ottawa, Canada, held a rally and underscored their support of the nationwide boycott of the regime’s sham elections. They chanted, “Mullahs in Iran have blood on their hands, and our vote is regime change,” “Iran has not forgotten that [Raisi] is the butcher of the 1988 massacre.” They also expressed their support of the Iranian opposition leader, Mrs. Maryam Rajavi, by chanting, “Down with Khamenei, Down with Rouhani, Viva Rajavi, Viva freedom.”

Iranians in Vienna on Monday expressed their utter support of the growing calls for the nationwide boycott of the regime’s elections. They chanted, “The Iranian people boycott the sham election.” They also reminded the European countries that the mullahs’ regime and its nuclear program threaten the whole world. “The threat of an atomic bomb will remain for as long as this regime is in power,” Iranians chanted in this regard.

The MEK and its supporters also play a significant role in the nationwide boycott of the regime’s elections inside Iran. The MEK’s role in mobilizing the society has terrified the regime.

“The MEK and enemies are trying to discourage the people from the future and participating in the upcoming election,” said Mohammadreza Yazdi, head of the Revolutionary Guards (IRGC) Mohammad Rasulullah Brigade, tasked with controlling Tehran.