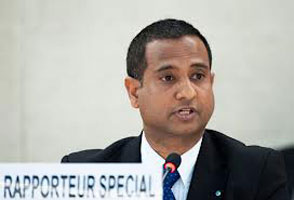 The Iranian regime has executed more child offenders in 2014-2015 compared to any time during the past five years.

Dr Ahmed Shaheed, the United Nations Special Rapportuer on the Situation of Human Rights in Iran, wrote in a piece published on his website on Wednesday: “Iran is one of a handful of countries that still executes child offenders, or boys and girls under 18 years of age at the time they commit a crime.”

“In 2015 human rights groups documented at least three executions of child offenders, with at least 160 others awaiting the same fate on death row.”

Mr. Shaheed said: “The number of child offenders executed in 2014-15 are actually higher than at any time during the past five years,” adding “piecemeal” measures are not enough.

“Today Iranian judges can, and have, sentenced girls as young as nine lunar years and boys as young as 15 lunar years to death by hanging, in plain violation one of the most fundamental and sacrosanct rights recognized under international law,” he said.

The UN investigator has joined the members of the committee in calling on the Iranian regime to take more drastic and immediate measures to ensure that from this day on no child offenders are executed in Iran, regardless of the nature of their crime.

There have been over 2,000 executions in Iran in the two years that Hassan Rouhani has been in office, more than in any similar period in the past 25 years.

On April 20, 2014, Hassan Rouhani described these executions as “God’s commandments” and “laws of the parliament that belongs to the people.”