The workshop uses machines from a now-closed facility at Karaj that suffered what Tehran says was a sabotage attack by its arch-foe Israel. The workshop can make parts essential to advanced centrifuges that are among the most efficient in Iran’s enrichment programme

Swedish FM Asks Citizens Not to Travel to Iran

Today, the Swedish Ministry of Foreign Affairs announced that it recommends Swedish citizens not to undertake any unnecessary trips to Iran due to changes in the security situation.

تجمع اشرف نشانها و شادی آنها مقابل دادگاه دژخیم حمید نوری
The trial of Hamid Nouri, a former prison guard and one of the perpetrators of the mass executions of political prisoners in 1988 in Iran, continued in a Swedish court on Thursday, April 28. At the second hearing of the final defense stage to file an indictment, the prosecutor presented her final findings to the court.
In this session, on the second day of submitting her final indictment, the prosecutor submitted a request for life imprisonment for Hamid Nouri for his involvement in the massacre of political prisoners in Gohardasht prison in 1988.
Citing clear evidence and the testimony of many eyewitnesses, the prosecutor rejected the statements of the defendant who denied the crimes committed in Gohardasht prison and his active role in the mass killings.
After months-long protesting and enduring all sorts of weather and the Iranian regime’s threatening, Iranians and the victims’ families who had rallied outside the court celebrated the milestone, and hopes rose high for a final verdict in May.

TEHRAN, Iran (AP) — Dozens of furious protesters in northern Iran chanted slogans and hurled rocks at police on Thursday, Iranian media reported, injuring five officers over frustrations that their lush village had become a massive waste collection site that they say has become a health hazard.

Security forces dispersed the gathering and detained several protesters, referring their cases to prosecutors in the town of Saravan in the northern Gilan Province, the semiofficial Fars news agency reported.

AFP- Executions in Iran rose by 25 percent in 2021, a report by two leading NGOs said Thursday, expressing alarm over a surge in the numbers executed for drug offences and also the hanging of at least 17 women.

The rate of executions in Iran also accelerated after the June election of hardline former judiciary chief Ebrahim Raisi to the presidency, said the report by Norway-based Iran Human Rights (IHR) and France’s Together Against the Death Penalty (ECPM). According to a local report, on April 27, two citizens of Mariwan, Kurdistan province, were injured by Revolutionary Guards while they were resisting extortion and bullying.

According to locals, two brothers, Saman Gheytaran and Jabbar Gheytaran, who are members of the Revolutionary Guards and who use to extort money from the people with the support of the IRGC, targeted Osman Veisi (33) with a musket weapon from a few meters away near the village of Hassan Oleh. Another citizen, identified as Keyvan, was also stabbed by the duo.

The top Republican on the House Foreign Affairs Committee is calling on President Biden to conduct a review of individuals sanctioned by the U.S. for their contributions to Iran‘s ballistic missile program and state-sponsored terrorism apparatus. Rep. Michael T. McCaul of Texas said the congressionally-mandated review of the lists must be conducted before lifting any sanctions as part of a new Iran nuclear deal. In a letter to Mr. Biden obtained by The Washington Times, Mr. McCaul said the administration needs to have a clear understanding of the full scope of Iran‘s malign network before easing pressure on Tehran. 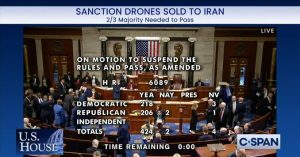 The US House of Representatives on Wednesday approved a bill that would severely restrict the Iranian regime’s drone activities. The bill, presented by a number of representatives from both sides of the aisle in November 2021, was finally approved today. This law intends to prevent Tehran and its militias from having access to drones and UAVs and stop their threat to US forces or its allies.

The bill, called “Stopping Iran’s UAVs,” along with other US sanctions on the Iranian regime’s military activities, prevents the acquisition of supply parts, sale, and transfer of UAVs and relevant technologies to the regime. For the bill to become law, it must also be approved by the US Senate.

IMF: Soaring Food Prices in Iran Have Nothing To Do With the Ukraine War

Despite claims by economic officials in Iran, the International Monetary Fund says the Ukraine war has had no effect on food supplies to countries like Iran and Iraq.

Jihad Azour, the Director of the Middle East and Central Asia Department at the International Monetary Fund, stated that the war in Ukraine has actually not affected food supplies to countries such as Iran and Iraq.

“Food shortages are important for many countries in the region, including Iran and Iraq,” Mr. Azour said in an interview. “The way we look at it is whether it is a price issue, or it may be a supply issue, or it is related to purchasing power. Most of the countries affected are low-income with low storage capacity and very high wheat demand. In some food baskets, the need for wheat is between 60 and 67%. This is not the case with Iran and Iraq.”

“In the case of Iran… wheat and other food items are not subject to any sanctions regimes,” the IMF official told reporters on the sidelines of a report on the Middle East and North Africa Economic Outlook. “Of course, rising prices have put additional pressure on the social services system.”

Lawmakers to Biden: No More Secret Negotiations With Iran

Republican lawmakers in Congress are fed up with the Biden administration’s secret diplomacy with Iran and refusal to inform the American public about what concessions will be granted to the world’s foremost sponsor of terrorism as part of a new nuclear deal.

With negotiations stuck in their final stage amid Iran’s demands that all U.S. sanctions be lifted on its chief terrorist outfit, the Islamic Revolutionary Guards Corps (IRGC), Republican foreign policy leaders are pressing top Biden administration officials to publicly brief Congress on the state of diplomatic talks.

Numerous oil petrochemical sites in different cities of Iran witnessed workers launching new strikes on Monday, April 25, protesting their low paychecks and demanding better working conditions. These latest measures resulted in sites, such as the Bushehr petrochemical complex, coming to a complete halt. The protesting workers are blaming their officials and contractors for refusing to deliver on previous promises. In recent days, similar protests have been reported from other cities, including Asaluyeh, southwest Iran. The Iranian regime’s judiciary has continued to make arrests and issue sentences for civil society activists in recent days. The female labor activist Asal Mohammadi was sentenced to one year and eight months in jail. The 36th Branch of Tehran’s Provincial Appeals Court upheld the conviction of labor activist Asal Mohammadi. She has been sentenced to one year and eight months imprisonment and two years deprived of membership in political and social groups. Her charges are propaganda against the state and assembly and collusion against national security.

Talks in Vienna to revive the 2015 Iran nuclear deal paused last month, and it isn’t clear whether they’ll resume or officially end. A little-noticed line in a State Department report published last week makes a good case for formally walking away.

“The United States has concluded that serious concerns remained outstanding regarding possible undeclared nuclear material and activities in Iran,” according to State’s annual report on compliance with arms control and nonproliferation agreements. The document notes that the Islamic Republic has not fully cooperated with the International Atomic Energy Agency (IAEA), which is trying to investigate possible secret nuclear activity at four sites around the country.

Washington, DC – Congresswoman Claudia Tenney (NY-22) today led a letter to President Joe Biden urging him to ensure his Administration’s senior officials appear publicly before the House Foreign Affairs Committee to provide much-needed transparency about ongoing nuclear deal negotiations with the Iranian regime. The Biden Administration has been engaged in negotiations for a renewed nuclear deal with Iran, led by U.S. Special Envoy for Iran Robert Malley. Since his appointment on January 28, 2021, Mr. Malley has appeared before the House Foreign Affairs Committee for one closed-door briefing and has failed to appear for any public hearings on the matter.